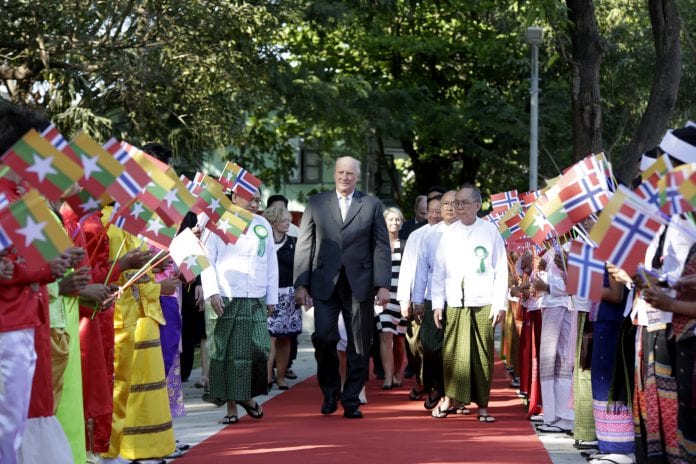 Norwegian king Harald V’s state visit to Myanmar has led to pledges to extend economic and business ties and a memorandum of understanding (MoU) on development programs, according to official sources.

An MoU was signed regarding cooperation on development programs, even as Norway is already deeply invested in Myanmar.

Separately, the king participated in opening ceremonies for the Norwegian-funded Center of Excellence for Greening and ASEAN Institute for Green Productivity at the Ministry of Science and Technology. This is intended to increase ASEAN cooperation in environmentally friendly research, knowledge sharing, education, and training.

Norway has been involved in Myanmar’s reforms with close cooperation between the Oslo Peace Center and the Myanmar Peace Center, along with aid provided by the Norwegian Red Cross Society.

Norway was the first European country to lift sanctions on Myanmar in 2012, and cancelled $534 million in debt in 2013.

Norway opened an embassy in Yangon in 2012, and Myanmar is planning to open an Oslo embassy in early 2015. President U Thein Sein visited Norway in February.