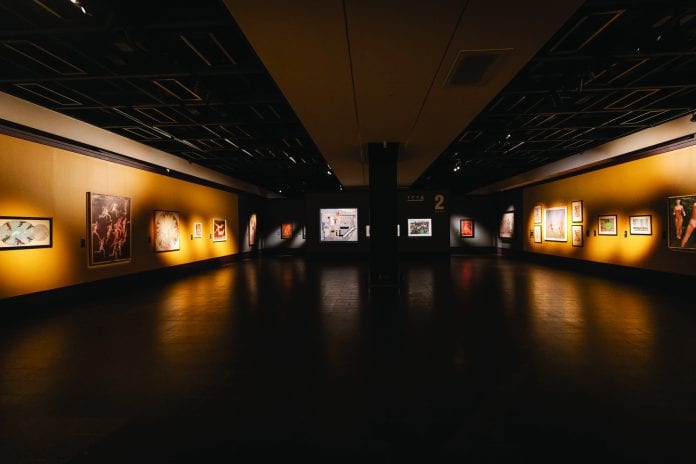 In the exhibition “Deineka/Samokhvalov,” at the Manege Central Exhibition Hall, works by two important artists of the Soviet era – Alexander Deineka and Alexander Samokhvalov – are displayed side by side. The exhibition, which runs through January 19, shows their overlapping visions of a prosperous, harmonious U.S.S.R., offering a fresh perspective on the dictates and homilies of that period, and also on the craft and skill of painters often dismissed as instruments of propaganda.

“We need to analyze, and have a fresh view on that time,” said Semyon Mikhailovsky, the exhibition’s curator.

“We have fought with this past, criticized the way it portrayed our society, pointed to the fact that it was a terrible time of prison camps, deaths and suffering,” Mikhailovsky added. “Others say that to look back at this is nostalgia, that we wish we were big and strong, like in the Soviet myth. But through these artists’ eyes, we show our history. It is important to look at this.”

Deineka and Samokhvalov were both born in provincial Russian towns in the 1890s, and moved to study art in the country’s principal cities, Deineka in Moscow, Samokhvalov in St. Petersburg. Although they met at various points – notably at the World Exposition in Paris in 1937, where both were featured in the Soviet pavilion – they were never close.

In a recent Skype conversation, Mikhailovsky discussed several of his favorite works from “Deineka/Samokhvalov.”

‘The Defense of Petrograd’

One of Deineka’s best-known works, “The Defense of Petrograd” shows an episode from 1919, during the civil war that raged after the two revolutions of 1917 between the Red Army, fighting for Bolshevik socialism, and the opposing White Army.

“The painting is organized into two parts,” Mikhailovsky said. “On the lower level they are going to war; on the upper level they are returning. The rhythms of movement that Deineka gets into the painting are wonderful. The men leaving are striding, purposeful; those coming back are halting. This is a tragic story, and for me it isn’t a positive painting, but a tragedy.”

He pointed out the graphic quality and geometric composition of the painting, with its upright bodies, angled rifles and horizontal industrialized structures: “These men and women are caught up in the mechanism of war and we feel the drama, the fight, the struggle.”

“We see them almost like fashion models, which is strange,” Mikhailovsky said. “I’m not sure that textile workers were so glamorous! Deineka wanted to suggest the link between these young ladies and the beautiful clothes being made by the factories.”

“Of course it’s very unreal,” he added. “The equipment isn’t at all realistic, and it’s all about the shapes and rhythms of the composition, with a monochromatic color scheme that is very beautiful and connected to art deco. At the same time, no one looks at us; they look away. It’s enigmatic, mysterious.”

This 1937 painting by Deineka shows a group of elegant young women attending a conference in a grand hall. “There is a desire for beauty that we feel in this painting,” Mikhailovsky said. “These are people from the future, but the architecture also suggests the past. They are the new elite, wearing beautiful clothes, inhabiting a beautiful space.”

“You see what a fantastic draftsman he was when you look at the detail of the clothes and hair,” he added, pointing out that one of the figures in the central group is more conservatively dressed, in a long skirt and headscarf – “perhaps a peasant who has become the host.”

Mikhailovsky said Deineka may be suggesting that the women are meeting to discuss the future, and, by extension, that women can be prime movers in society. “The textile workers that we saw in the other painting might be there,” he said. At the same time, he added, you have to remember that this was painted in 1937, at the height of the Great Purge of dissidents, “when people were being killed in their masses. What to do with that?”

Both Deineka and Samokhvalov found work illustrating children’s books, a niche that provided a certain amount of freedom from Soviet constraints, Mikhailovsky said.

Deineka’s “Tank” is one such illustration, from a 1930 book of drawings, “The Parade of the Red Army.” It shows a soldier marching by an oversize tank that looks ready to swallow him up. Or does it?

“This lack of realism was allowed because it was for children,” Mikhailovsky said. “The tank is obviously oversize, almost like an animal after the soldier. But you could also read it another way. Perhaps the man is leading the machine, despite its size, and the enormous creature is following him.”

Kirov was a prominent politician and a close friend of Stalin who was assassinated in 1934. Although Stalin was almost certainly behind his death, the murder was used as a pretext for a purge of those considered hostile to the Communist Party.

When Samokhvalov painted this in 1935, Kirov was still officially a hero, and the huge canvas shows him receiving flowers during a parade in front of the Winter Palace in St. Petersburg, offered by three figures who dance like Apollo’s three muses beneath him.

On the facade of the palace, we see an enormous portrait of Lenin; Mikhailovsky said that Samokhvalov originally painted Stalin, but changed it after that dictator’s death in 1953. Mikhailovsky pointed out the almost Italianate use of soft terra-cotta colors, and the predominance of white – signaling purity – in the youth on parade.

“But the faces are strange, like robots,” he said. “They are not real, not flesh and blood. They are almost like a new species, a new generation of hybrids. Their mouths are open, they want to say something, but they can’t – they have become robots with no will of their own.”

This small canvas, painted by Samokhvalov in 1931, was shown at the Venice Biennale in 1934. It is surprising to us now, Mikhailovsky said, that the Soviet regime allowed many of its artists – including Deineka and Samokhvalov – to travel and represent the Soviet Union at various international art festivals. (Deineka even traveled to the United States in the mid-1930s.)

“They represented the system abroad,” Mikhailovsky said. “And the state made money from the sale of their works, which is probably one of the reasons they allowed it.”

In this painting, the oversize figure of the student fills the canvas. “Samokhvalov cuts off the edge of the figure, so you don’t know where his hand or shoulder goes,” Mikhailovsky said. “The figure is too big in a way, which is intriguing, and his face is typically Russian, with the high cheekbones and slanted eyes suggesting a Mongolian or Asian look. You don’t know what this man is thinking, and yet somehow he is focused on you, even through those small eyes.”