Obama Optimistic on Change in Myanmar, More Work to be Done 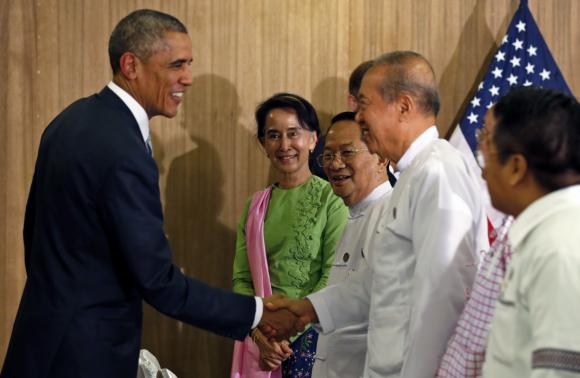 U.S. President Barack Obama said on Thursday he was optimistic about political change in Myanmar and called on the country's top politicians to push on with reform toward a free, inclusive and transparent election in 2015.

Myanmar began its emergence from international pariah status in 2011 when military leaders launched reforms after nearly half a century in power.

"The democratization process in Myanmar is real," Obama said at a joint press conference with the Southeast Asian nation's President Thein Sein at the presidential palace in the capital Naypyitaw.

"But in our discussions we recognized that this process is still incomplete."

Myanmar's speedy reform process, after years of sanctions and other U.S. pressure, was seen as a rare foreign policy achievement for Obama. But Obama's second presidential visit to Myanmar comes amid concern that reforms have stalled, and his administration has been trying to deal pragmatically with the quasi-civilian government.

Myanmar will continue with its transition, Thein Sein said.

"Some of the suggestions and concerns of the United States have been implemented," he said. "We need time but we are in the process of addressing these concerns."

Obama said he discussed with Thein Sein the need to work toward a situation in which the Muslim minority in the majority Buddhist country is protected and its rights respected.

The persecuted Muslim ethnic Rohingya faces a humanitarian crisis in western Rakhine state, and U.S. officials on Thursday called for Myanmar to draft a new plan to allow them to become citizens.

The substantial power still held by the military, which is handling the transition to democracy, was one of the key questions that needed to be dealt with, Obama told a group of Myanmar's most powerful lawmakers at a meeting earlier on Thursday.

The military holds 25 percent of seats in parliament, giving it veto power over constitutional amendments.

Among the group of lawmakers was opposition leader and Nobel laureate Aung San Suu Kyi, who is not eligible to become president under the existing constitution.

Also present was Shwe Mann, who holds the powerful position of lower house parliamentary speaker and is tipped by some as a contender for the presidency in 2015.