Obama Urges Progress in Myanmar Ahead of Rare Roundtable 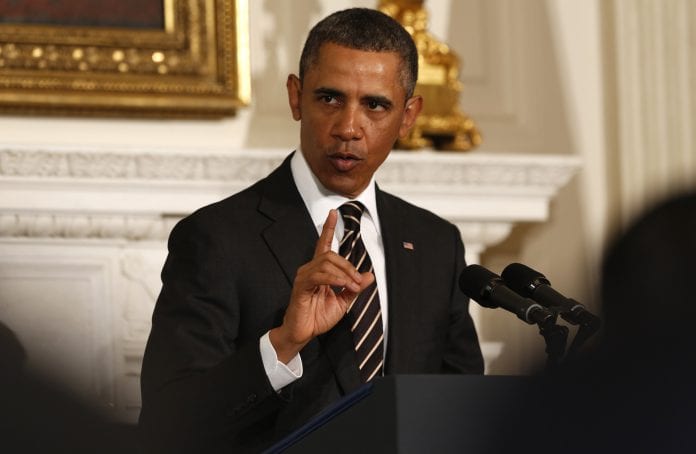 U.S. President Barack Obama urged Myanmar's government to make every effort to conclude a national ceasefire and protect the rights of minorities, just hours before the country's president and the military chief met opposition political parties and ethnic minority groups.

Some critics are calling Friday's hastily arranged get-together an attempt to burnish Myanmar's image ahead of a visit by Obama next month, his second to the country.

The roundtable meeting in the capital Naypyitaw, the first of its kind, comes as a peace process with ethnic rebels teeters on the brink of collapse and amid growing U.S. concerns about human rights abuses, including the jailing of journalists and alleged oppression of stateless Rohingya Muslims and ethnic minorities.

Obama spoke to Myanmar President Thein Sein on Thursday by telephone, urging that "every effort be made to conclude a national ceasefire in the short term", the White House said

The U.S. president, who will visit Myanmar for a regional summit on Nov 12-13, also stressed the importance of taking more steps to address the humanitarian situation in Rakhine state as well as measures to support the civil and political rights of the Rohingya people, the White House said.

Violence erupted across Rakhine in 2012 between ethnic Rakhine Buddhists and Rohingya Muslims, killing at least 200 people and displacing 140,000, most of them Rohingya.

The official purpose of Friday's talks has not been disclosed. The meeting began at 0230 GMT, with a news conference scheduled to take place two hours later.

Suu Kyi, looking solemn and businesslike, was the last to arrive at the meeting room at the presidential residence.

The talks are being held as cracks widen in the fledgling democracy ahead of an election next year.

In particular, tensions linger over moves by Suu Kyi's party, backed by 5 million petitioners, to amend the constitution and reduce the political clout of a military that ruled Myanmar brutally for 49 years. Suu Kyi is meeting for the first time with the powerful armed forces chief, Senior General Min Aung Hlaing, at Friday's talks.

News of the meeting so close to Obama's arrival has been met with scepticism in Myanmar, with some calling it theatre.

The government should instead focus on bringing some unity and openness to a nascent political system that was facing headwinds, he said, adding details of what transpires at the meeting should be revealed "with complete transparency and accountability".

Only six of Myanmar's 70 political parties and a few ethnic groups were invited to the talks.

"The president will have to explain," said Aye Maung, leader of the Arakan National Party, the second biggest ethnic party in parliament which is based in Rakhine state and was not invited.

Thein Sein, a former junta general, has been lauded for widespread reforms since taking power in 2011 and convincing the West to suspend most sanctions, but critics say those changes are now starting to unravel.

Obama has sought to present U.S. backing of Myanmar's reforms as a foreign policy success, but Washington has viewed developments in the country with growing concern.

On Tuesday, the U.S. State Department said it was "deeply concerned and saddened" by reports of the killing in army custody of Par Gyi, a journalist and former democracy activist who once worked as a bodyguard for Suu Kyi.

Despite winning massive popularity at home and abroad, since becoming a lawmaker Suu Kyi has been criticised for her reluctance to comment on contentious political issues, or speak out against the military.

Asked about the roundtable talks during an interview on Thursday with Radio Free Asia, Suu Kyi bluntly replied: "Where did you get this information? You should ask those who were invited."

Next year's parliamentary election will be the first since 2010, which ushered in a quasi-civilian system that dismantled the absolute control of a military that had ruled since a 1962 coup, 14 years after independence from Britain.

It will also be the first general election that Suu Kyi's National League for Democracy (NLD) has contested since it won a 1990 vote that the military ignored. The party boycotted the 2010 poll and Suu Kyi was under house arrest at the time.

The military holds several cabinet posts and 25 percent of legislative seats, essentially a veto on any attempt to change a constitution it drafted as any amendment needs more than 75 percent support. The NLD is leading the push to change that, but is facing strong resistance. (Reuters)