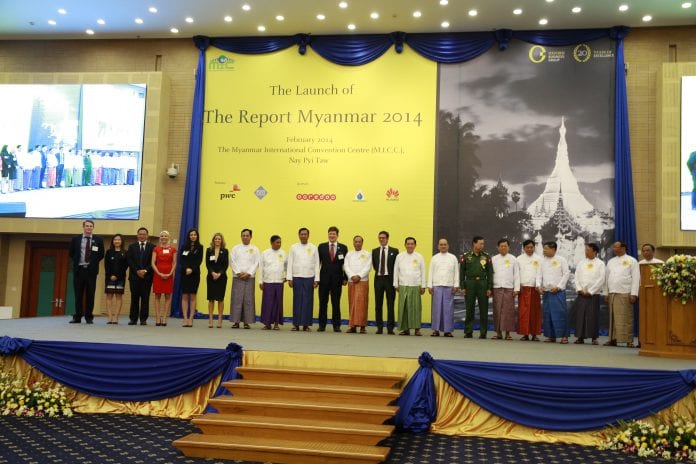 With most Western sanctions now lifted and a new mining law in the pipeline, “The Report: Myanmar 2014” charts the considerable interest that the country’s ore and gem reserves are generating among foreign companies, OBG said in a statement.

The  publication  also  looks  in  detail  at  the  oil  and  gas  exploration earmarked for the country, providing details of the tenders already launched for both onshore and offshore blocks, it said.

“While the rapid pace of development in Myanmar has inevitably brought major challenges, investors have shown themselves keen to participate in the country’s transformation,” he said.

“FDI has already risen exponentially in the last two years, and several sectors of the economy, such as telecoms, banking and energy, are evolving beyond recognition, confirming just how extensively Myanmar’s economic landscape is being redefined.”

Andrew Jeffreys, OBG’s CEO, added that Myanmar’s move to increase its participation on the regional stage, which was reflected in its first-time role as ASEAN Chair this year, had not gone unnoticed by investors.

“Myanmar’s political and economic development has been well supported globally, while the ASEAN Economic  Community’s  current  focus  on  regional  integration  will  facilitate  the  country’s transformation,” he said.

The report features a range of interviews with political, economic and business representatives, including President U Thein Sein, along with a sector-by-sector guide for investors, the firm said. Minister for the President’s Office and former chairman of the Myanmar Investment Commission (MIC) U Soe Thane, and the Minister for Finance and chairman of MIC U Win Shein were also interviewed, it added.

The report also contains contributions from international figures, including US President Barack Obama, the President of China Xi Jinping and the Secretary-General of ASEAN Le Luong Minh, OBG said.

With  a  new  building  code  in  place  and  demand  for  both  offices  and  housing  on  the  rise, OBG’s publication highlights the raft of new developments coming on-line, which are providing opportunities for foreign investors to collaborate with local players.

OBG said the report offers analysis of the major overhaul planned for Myanmar’s transport infrastructure, which will include extending and upgrading the nation’s roads and rail networks, alongside new airport projects.

The report analysed the government’s plans to attract new FDI to the sector, which remains dominated by extractive segments. It also discusses Myanmar’s agriculture sector, which remains a key contributor to the economy and should expand significantly on the back of anticipated technical development, backed up by reforms.

The report has been produced with the Myanmar Investment Commission (MIC). Contributions have also been made by PricewaterhouseCoopers (PwC) and law firm, Kelvin Chia Ltd.