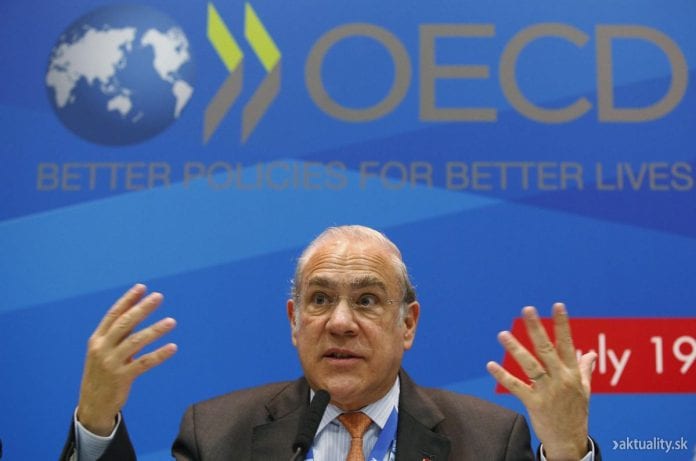 Slowing emerging markets are dragging on the world’s economic recovery and advanced countries are struggling to pick up the slack after years of debt crises, the OECD said on Tuesday last week, trimming its global growth forecasts.
In its latest snapshot of economic activity, the Paris-based Organisation for Economic Cooperation and Development forecast the world economy would grow 3.6 percent next year.
Though an improvement from the 2.7 percent expected for 2013, that was not as fast as the 4.0 percent estimated for 2014 in its last twice-yearly Economic Outlook dating from May.
“We’ve lowered our forecasts for many reasons, but the most important one is the downgrade in growth in the emerging countries,” OECD chief economist Pier Carlo Padoan told Reuters, also citing slower trade and subdued investment.
Padoan said advanced economies would not be able to make up for the momentum lost by many major emerging economies, hit by capital outflows triggered by the US Federal Reserve’s plans to rein in its exceptional monetary stimulus.
“The US is growing but they have to get their fiscal act together,” Padoan said. “The euro area is becoming a positive growth region again but at very weak rates, and Japan is growing more but the question is whether this will be sustainable.”
The OECD said the Fed should scale down its bond purchases as activity strengthens next year, forecasting that growth in the world’s biggest economy would reach 2.9 percent in 2014, its strongest performance since 2005, after an estimated 1.7 percent this year.
Despite the improving US outlook, the OECD saw a major threat to the global recovery if the United States hit its debt ceiling, adding there was a “strong case” to scrap it all together.
Having been a drag on global growth in recent years, the euro area was finally seen emerging from two years of recession to post growth next year of 1.0 percent, down marginally from an estimate of 1.1 percent in May.
Still at risk of flare-ups in the eurozone’s debt crisis, the recovery would be uneven among the bloc’s members, marked by high youth unemployment and weak inflation, the OECD said.
That was ample reason in the OECD’s eyes for the European Central Bank, which cut its main rates to record lows this month, to keep monetary policy at current levels at least until the end of 2015, and possibly use more unconventional measures if deflation emerges.
Growth in regional powerhouse Germany was expected to speed up from an estimated 0.5 percent this year to 1.7 percent next year, down slightly from 1.9 percent in the OECD’s May forecasts. France, the eurozone’s second largest economy, was seen growing 1.0 percent next year, in line with government estimates and up from an earlier OECD forecast of 0.8 percent.
Outside the euro area, the OECD sharply revised up its growth forecasts for Britain and predicted the Bank of England would start to raise interest rates in late 2015, when unemployment is expected to fall to 7 percent.
The OECD now expects growth of 2.4 percent next year, compared to its earlier forecast of 1.5 percent.
“Given these projections, slack in labour and product markets will narrow and the stance of monetary policy should start to normalise in the last quarter of 2015,” the OECD said.
New BoE forecasts last week suggested unemployment would hit 7 percent in the second half of 2015, based on current market interest rates, but Governor Mark Carney stressed that this would not automatically trigger a rate rise.
Propelled by exceptional monetary surplus this year, Japan was on course for growth of 1.5 percent next year, up from a May forecast of 1.4 percent, but down from 1.8 percent in 2013.
Meanwhile, the OECD trimmed its growth forecast for China next year to 8.2 percent, from 8.4 percent previously, but up nonetheless from an estimated 7.7 percent this year.                             Reuters