Oil Pipeline Through Myanmar to China Expected to Open This Month: Sources 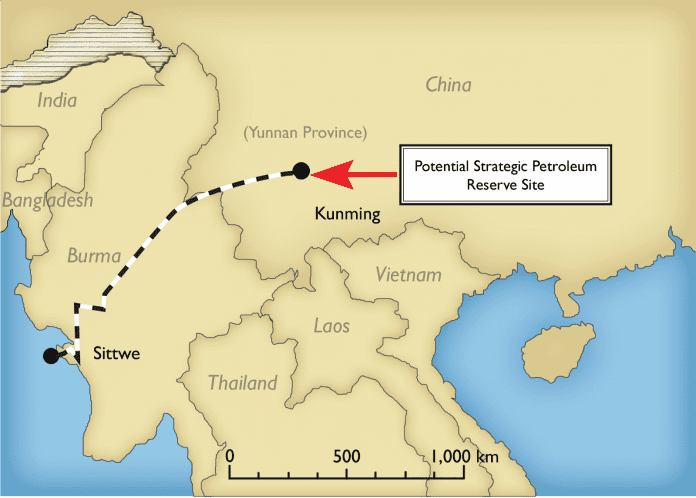 A crude oil pipeline and a deep sea port meant to secure an alternative route for Chinese imports overland through Myanmar are set to open at the end of January, but an affiliated refinery in China is months away from completion, sources said.

The finished development should help ease China’s reliance on shipments via the narrow and potentially risky Malacca Strait. Although that route, through which some 80 percent of China’s oil imports now pass, would still be used for the vast majority of overseas purchases.

PetroChina, the main investor in the facilities, has built 60 percent of the refinery in Yunnan province that borders Myanmar, designed to process the crude shipped via the pipeline, a spokesman for the state energy giant said last week. Completion is slated for later this year.

Until the 200,000 barrel-per-day (bpd) Anning refinery opens, the new pipeline can only be used to pump oil into tanks, providing limited near-term support to China’s crude oil imports, which expanded by nearly 10 percent in 2014 to 6.2 million bpd. The pipeline has a capacity of 440,000 bpd.

A company official at China National Petroleum Corporation (CNPC) subsidiary Southeast Asia Pipeline Co Ltd, which is in charge of building and managing the pipeline, said the 2,400-km (1,500 miles) line would open at the end of this month.

The planned opening was confirmed by an energy official in Myanmar.

“Things are ready to launch the oil pipeline and it’s tentatively scheduled for January 30,” said the official, who requested anonymity as he is not authorised to speak to media.

Before the launch of the new refinery, oil will be stored in tanks in Guangxi, a region east of Yunnan. CNPC also has up to a dozen storage tanks in Myanmar, and could have even more in Yunnan, according to a Chinese media report.

CNPC had said in 2013 that the pipeline was 94-percent complete and would be finished that year.