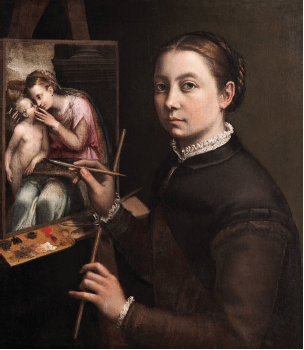 MADRID — Old Masters have always outnumbered Old Mistresses, especially at the Prado. The museum is chock-a-block with paintings we know from Art History 101, in which female artists seem almost nonexistent. We come to the Prado to admire El Greco’s bony saints and Francisco de Goya’s strolling majas, to marvel at Diego Velázquez’s “Las Meninas,” that brilliant painting-puzzle in which the artist depicts himself with assorted members of the Spanish court, working on an enormous canvas that we cannot see, leaving us to wonder for eternity what it shows.

This year the Prado is celebrating its 200th anniversary, and the good news is that the female presence in its galleries has been winningly expanded with “A Tale of Two Women Painters: Sofonisba Anguissola and Lavinia Fontana.” The historically revelatory show, which remains on view until February 2, brings together about 60 works by two 16th-century Italian artists who were celebrated in their lifetimes but rudely forgotten after their deaths. Over the centuries, many of their paintings were lost, destroyed or reattributed to their male colleagues, and it wasn’t until the 19th century that the process of rehabilitation began.

Sofonisba, the more compelling and modern of the two, was a sensitive portraitist whose work is easy to recognize. (Both artists are known by their first names). She is sometimes described as the first major female painter of the Renaissance. The show opens with a series of self-portraits that emphasize the roundedness of things. She depicts herself as a wide-eyed, moon-faced young woman eager to declare her ambition as an artist. Her hair is pulled back indifferently, and her clothing is nothing special. She generally wears the same black jacket, and the same white blouse that ties at the neck. She has no use for makeup or jewelry, and there’s no grand Mona Lisa-like landscape unfurling in the distance behind her. Instead, she appears against flat, brownish, near-empty backgrounds that heighten the austere mood.

Some of her most affecting portraits are small in size. “Self-Portrait” (1558), on loan from the Colonna Gallery in Rome, is just 10 by 8 inches and quietly riveting. Sofonisba is dressed in her usual white blouse, with three thin strings dangling delicately from her collar to the bottom edge of the canvas. Rendered with Flemish-like precision, the strings are like an exquisite necklace made from nothing but cotton and air.

Born around 1535, in a well-off family in Cremona, Sofonisba was the oldest of seven children. She began painting at an early age, using herself and her siblings as models. When she was around 11, her parents sent her and one of her sisters to train in the workshop of a local painter named Bernardino Campi. Some scholars believe it was the first time in the Renaissance that any girls were given such an opportunity. Michael W. Cole, a professor at Columbia and contributor to the Prado catalog, is about to publish “Sofonisba’s Lesson,” a substantial monograph that opens at the poignant moment when Sofonisba “left her father’s home” to study art. Cole lavishes praise on both her father and teacher for their open-mindedness.

Still, one wouldn’t want to overplay the role of the men in Sofonisba’s life and deny her the force of her own decisions and creativity. Unable to study anatomy and paint big biblical or mythological scenes, she achieved something new by enlarging the area in art reserved for personal experience. She has no rivals as a painter of children and adolescents, whom other painters of her era tended to depict like adults, except a few feet shorter.

The Prado show, curated by Leticia Ruiz Gómez, takes the form of a double feature, pairing two artists who flourished in the same era, in the same area of northern Italy, but who probably never met. Their works are made to mingle in the galleries in a pas-de-deux. But is this approach appropriate? It is hard to imagine that male artists would have to share the galleries quite this way.

The double billing seems especially odd because one artist overwhelms the other. A show that was perhaps intended as an expression of sisterly solidarity ends up celebrating Sofonisba’s intimate portraits at the expense of Lavinia’s work.

Like most women artists of her era, Lavinia was the daughter of an established painter. Her father, Prospero Fontana, trained her in his workshop in Bologna, in a mannerist style. In those days, having a father who painted allowed a young woman to gain studio experience without risking her reputation by being sent away from home and put in the custody of a possible cad. Even later artists, like the much-celebrated Artemisia Gentileschi in the 17th century and Angelica Kauffman in the 18th century, were also trained in their father’s workshops.

Lavinia bore 11 children, only three of whom outlived her. Thankfully, her husband, a fellow painter named Gian Paolo Zappi, was ahead of his time in his willingness to be a house husband. He gave up his career to help raise the children and assist in the studio. Lavinia claimed, a little patronizingly, that she refused to let her husband help with her paintings, except to fill in the drapes.

Although Lavinia was born in 1552, just two decades after Sofonisba, she seems to belong to a different era. She is more of a mannerist than a Renaissance-style naturalist, less interested in capturing individuals than in cataloging their expensive clothes — or the lack thereof, as in “Mars and Venus,” a winking interpretation of Greek myth dominated by a helmeted Mars and a female turned to display her pale backside.

More typically of her work, Lavinia’s “A Lady of the Ruini Family” (1593) shows an auburn-haired noblewoman smiling blandly as she strokes her lap dog. She’s not the only one in jewels. The little dog, too, who appears in profile, its hind legs resting on a tabletop, is actually wearing an earring — a hoop with three dangling stones.

Even so, the rehabilitation of forgotten women painters is an admirable and essential pursuit, and the Prado is to be congratulated for untangling so much 16th-century history in this exhibition.

Not every artist can be a Sofonisba, a figure of robust, even dazzling, originality. Most artists are more like Lavinia, capable but not transformative, more relevant to their era than to ours. Still, we want to know about all of them. Art history has preserved the efforts and stories of countless second-rate men; women deserve the same courtesy.

Through February 2 at the Museo Nacional del Prado in Madrid, museodelprado.es.