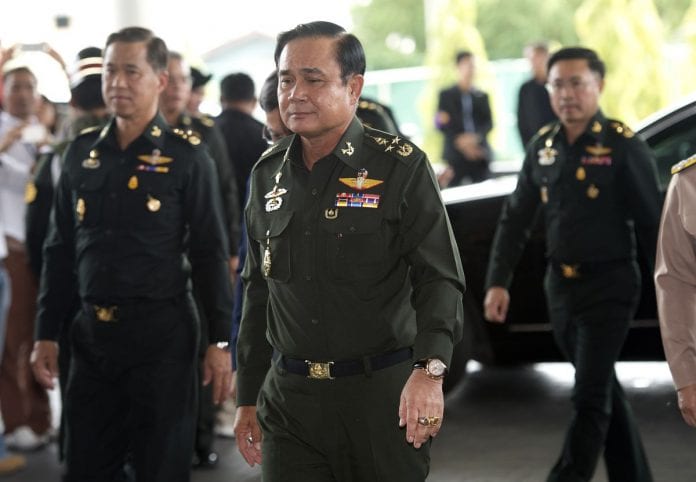 When retired general Prayuth Chan-ocha lands in Myanmar on Thursday, his first overseas trip as Thailand's new prime minister, he can expect a little love and a lot of understanding.

Prayuth, 60, led a military coup that toppled the elected government of Prime Minister Yingluck Shinawatra on May 22. His junta has detained opponents, shut down websites and banned political gatherings. He was elected prime minister in August by a national assembly he helped appoint.

His Myanmar counterpart, President Thein Sein, is also a former general in his sixties with dubious democratic credentials. Thein Sein's quasi-civilian government took power in 2011 after a rigged election, replacing nearly half a century of military dictatorship. His cabinet – like Prayuth's – is dominated by serving or former military officers.

Yet both men are self-styled reformists who say they have a "roadmap" to lead their people towards happiness and prosperity.

Prayuth is due to meet Thein Sein in Naypyitaw, Myanmar's capital, on Thursday, then with Thai investors in the commercial capital Yangon the following day.

But some analysts said the trip would advance few economic goals and achieve little beyond giving the bluff Prayuth a much-needed statesmanlike veneer.

Mired in political turbulence for almost a decade, Thailand has allowed economic ties with its neighbour to decline in recent years, said Sean Turnell, an expert on Myanmar's economy at Australia's Macquarie University.

"You can't help but feel the once tight economic relationship between Myanmar and Thailand has drifted, as other countries have come racing in," said Turnell. He noted that only one of the nine foreign banks that recently got approval to operate in Myanmar was Thai – Bangkok Bank.

The project was delayed after its leader, Italian-Thai Development Pcl, failed to secure private investment and agree on a power source for the zone. The Thai and Myanmar governments took control in 2013 and hope to develop it with Japanese help.

"I wouldn't be surprised to see some announcement of the on-going importance of Dawei," said Turnell. "But I'd be very surprised to hear anything of substance."

Prayuth has no plans to visit Dawei itself, said another spokesman. Nor will he meet opposition leader and democracy leader Aung San Suu Kyi, who spent years as a prisoner of Myanmar's military.

According to an official from Thein Sein's office, who spoke on condition of anonymity, the president will raise the issue of two migrant workers from Myanmar arrested on Saturday on suspicion of murdering two British tourists on a Thai resort island last month.

Many people in Myanmar, commenting on social media, said they suspected their compatriots had been made scapegoats by Thai police. Police deny that.

For Prayuth, Myanmar will be a warm-up for the Asia–Europe Meeting summit in Italy, where he joins dozens of heads of state on Oct. 16-17.

Compared with the globetrotting predecessor he overthrew, Prayuth has a lot of catching up to do. During her 33 months as prime minister, Yingluck Shinawatra notched up visits to at least 40 countries.

Her brother, Thaksin Shinawatra, a telecoms billionaire, was prime minister until 2006, when his government was also toppled by the military. Street protests followed, culminating in a military crackdown on Thaksin's supporters in 2010.

Despite trading ties, political relations between Thailand and Myanmar have often been ambivalent. The first was a booming international hub and long-time U.S. ally, the second a pariah state with a moribund economy.

With Myanmar now tiptoeing towards reform, and Thailand marching towards authoritarianism, their fates seem to be converging. These days, leaders in both countries are talking the same language.

Both versions of democracy consist of systems where the military holds immense formal and behind-the-scenes powers.

Most members of Thailand's handpicked national assembly are acting or retired soldiers or police. Similarly, a quarter of the seats in Myanmar's parliament are reserved for serving members of the military.