Only 25pc of Global Workforce on Permanent Contracts: ILO 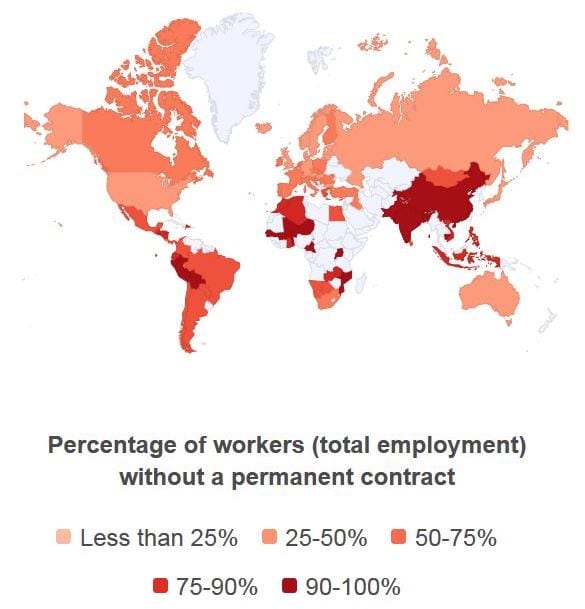 A recent report revealed that only one quarter of workers worldwide is estimated to have a stable employment relationship, warning that there is widespread insecurity among the global workforce.

The World Employment and Social Outlook 2015 (WESO) report by the International Labour Organization (ILO) finds that three quarters of workers are employed on temporary or short-term contracts, or in informal jobs often without any contract.

Over 60 percent of all workers lack any kind of employment contract, with most of them being self-employed or contributing family work in the developing world, the report said.

Even among wage and salaried workers, less than half (42 percent) are working on a permanent contract, the UN agency said.

ILO’s report said that while wage and salaried work is growing worldwide, it still accounts for only half of global employment, with wide variations across regions.

Another current trend is the rise in part-time employment, especially among women. In the majority of countries with available information, part-time jobs outpaced gains in full-time jobs between 2009 and 2013.

“These new figures point to an increasingly diversified world of work. In some cases, non-standard forms of work can help people get a foothold into the job market. But these emerging trends are also a reflection of the widespread insecurity that’s affecting many workers worldwide today,” said ILO Director-General Guy Ryder.

“The shift we’re seeing from the traditional employment relationship to more non-standard forms of employment is in many cases associated with the rise in inequality and poverty rates in many countries,” added Ryder.

“What’s more, these trends risk perpetuating the vicious circle of weak global demand and slow job creation that has characterised the global economy and many labour markets throughout the post-crisis period.”

“The way forward is to ensure that policies take into consideration the evolution of how we work today. This means stimulating investment opportunities to boost job creation and productivity, while ensuring adequate income security to all types of workers, not just those on stable contracts,” said Ryder.

Income inequality is increasing or remains high in the majority of countries – a trend that is aggravated by the rising incidence of non-permanent forms of employment, growing unemployment and inactivity. The income gap between permanent and non-permanent workers has increased over the past decade.

The report finds that despite the positive steps made towards improving pension coverage, social protection, such as unemployment benefits, is still mainly available only for regular employees. For the self-employed, even pensions are scarce: in 2013, only 16 per cent of the self-employed contributed to a pension scheme.

According to the report’s authors there is a growing recognition that labour regulation is necessary to protect workers – especially those in non-standard work – from arbitrary or unfair treatment and to enable effective contracts between employers and workers.

Employment protection laws have been very gradually strengthening over time, a trend that is common across most countries and regions. However, in Europe, labour protection has generally decreased since 2008 when the global financial crisis started.

“The key issue is to match regulation to an increasingly diversified labour market,” said Raymond Torres, Director of the ILO Research Department and lead author of the report.

“Well-designed regulations can support both economic growth and social cohesion.”