Only Three Political Prisoners among Thousands Released in Myanmar 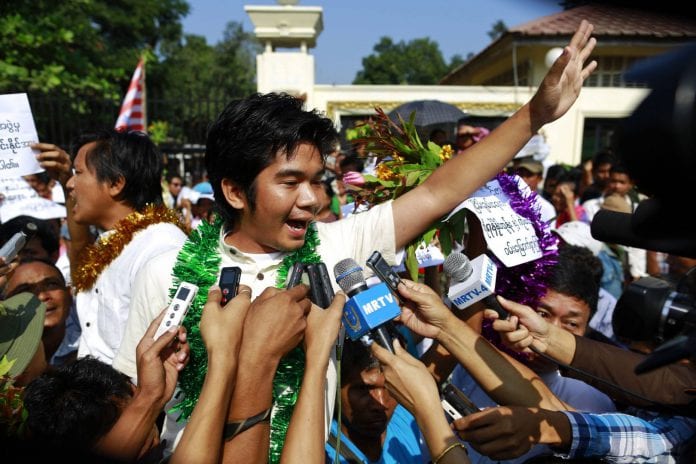 Only three political prisoners were among thousands of people granted amnesty by the Myanmar government this week and rights group said the release was apparently aimed at improving the country's image before a visit by the U.S. president.

Myanmar said on Tuesday it was releasing 3,073 prisoners for the sake of "peace and stability" and "the rule of law", but it gave no details of who they were or why they had been imprisoned.

The release came just over a month before Myanmar hosts an summit of leaders from the Association of South East Asian Nations (ASEAN) that U.S. President Barack Obama and other world leaders are expected to attend.

The government has in the past attempted to bolster its reformist credentials by releasing political prisoners, often shortly before major diplomatic meetings, but a Myanmar right group and Amnesty International said only three political prisoners were among the 3,073.

"Some had only a few months to serve," AAPP member Bo Kyi said on Wednesday.

"As we all know, the upcoming ASEAN summit with only a month away and the visit of President Obama there. It's a typical reason," he said, when asked about the motive for the release.

"This is nothing but an empty gesture on the authorities' part," Richard Bennett, the group's Asia Pacific director, said in a statement.

"If the Myanmar authorities were genuine about improving respect for human rights, they would follow through on the long-standing promise to clear the country's jails of the dozens of peaceful activists still behind bars."

About 73 political prisoners are believed to still be in detention, according the AAPP.

For decades under military rule, Myanmar had a grim record on human rights but a reformist government left by President Thein Sein took over in 2001.

Bennett said his group was getting reports of human rights defenders, land rights activists, journalists, political activists and others being imprisoned for "nothing more than just expressing their opinions".

"As long as these detentions continue, amnesties … do nothing to improve Myanmar's human rights situation," he said.

According to a prison official who declined to be identified, nine former military intelligence officials jailed during after a factional struggle within the military in 2004 were among those released.

Among the nine, who were not considered a political prisoners, was former Brigadier General Thein Swe, 71, who was sentenced to 152 years in jail in October 2004. Reuters