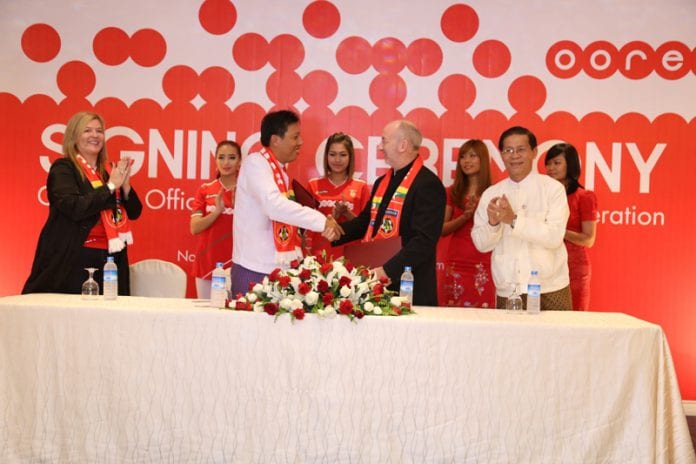 Qatar-based telecoms firm Ooredoo has announced that it has become the official partner of the Myanmar Football Federation (MFF).
Ooredoo revealed last week that it has reached an agreement to sponsor all national teams in Myanmar including men’s, women’s and youth teams and comes at an important time as the national teams gears up to play in the 27th Southeast Asia Games.
Ooredoo recently announced their sponsorship of French giants Paris St Germain (PSG) and revealed that two talented young Myanmar footballers will be invited to attend a coaching session in Dohar led by PSG coaches at the end of the month.
“We are proud to show our support towards Myanmar Football Federation and Ooredoo is committed to building sports and sportsmanship across the country,” said Ross Cormack, CEO of Ooredoo Myanmar. “Football brings all the nation together and all walks of life, we have found a great partnership with MFF,” he added.
Ooredoo and PSG will also bring qualified coaches and training programmes to Myanmar with an aim to further develop footballers in the country, which is ranked 140th in FIFA rankings.
“We are very honoured to receive such tremendous support from an international organisation like Ooredoo,” said U Zaw Zaw, president of MFF. “This support will allow us to be successful in all MFF development programmes and international games. We hope to receive continuous support from Ooredoo and we wish Ooredoo every success in launching operations,” he added.
Ooredoo has taken a key role in the development of sport in Myanmar since being announced as the winner of two international telecommunications licenses in June. The company recently announced its official partnership with the Myanmar Chinelone Federation and Special Olympics Myanmar.
Ooreddo also recently hosted its first recruitment fair, where it attempted to attract Myanmar nationals for roles including Customer Service, Retail, Sales, Network and IT, Finance and Human Resources.