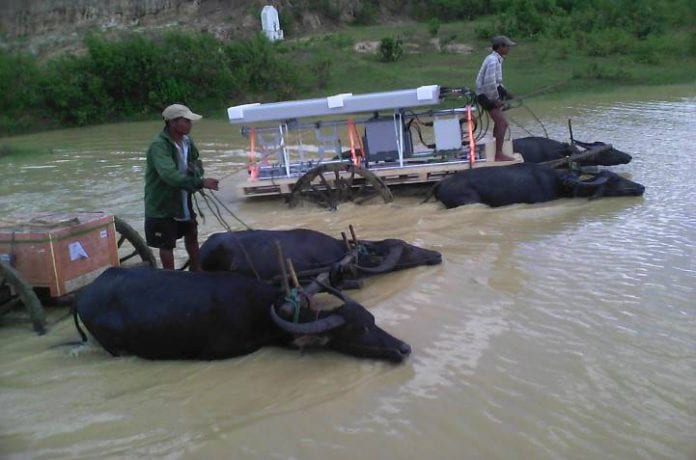 Qatari telecoms operator Ooredoo said its countrywide network rollout in Myanmar is progressing rapidly despite facing challenges due to monsoon and in getting construction permits.

“Yes, we have encountered some difficulty in obtaining permits to build and yes, the weather has proved challenging at times but where there is a will there is always a way,” Ooredoo Myanmar’s CEO Ross Cormack said.

Cormack said he was delighted with the progress of the network rollout and the firm has received “great support on the ground from people who recognise the benefits our network will bring.”

Ooredoo says it is delivering 3G services across both 2100 and 900 frequencies. However, the active infrastructure that sits on the towers being built is both “heavy and expensive,” making transportation an important consideration, it said.

Ooredoo’s network was available in 78 townships across the cities of Mandalay, Nay Pi Taw and Yangon when its services were introduced on August 15.

There have been reports of many customers expressing frustration over the quality of the network, with some users reporting frequent dropped calls and sketchy voice and data quality. However, Ooredoo still maintains that it provides “crystal clear voice and fast internet services.”

“Our customers have told us that they appreciate the clarity of our voice service and the speed of our fast internet, we’re working hard to bring these services to more people across Myanmar as quickly as possible,” Cormack said.

He added that Ooredoo remains on track to deliver network coverage to 25 million people by the end of this year and said the experience that is being gained in overcoming challenging conditions will hold the company in good stead as it aims to deliver on its pledge to provide coverage to 97 percent of the population within five years.

As well as expanding out from established coverage in the main cities, into districts such as Yamethin and Sagaing, Ooredoo also reported good progress in more outlying regions, such as Taungoo, Pyay, Kyauske, Bago and Thayarwaddy.

The firm said with the end of the rainy season in sight it expects the drier conditions to reduce complications associated to construction and access, resulting in a faster rollout.