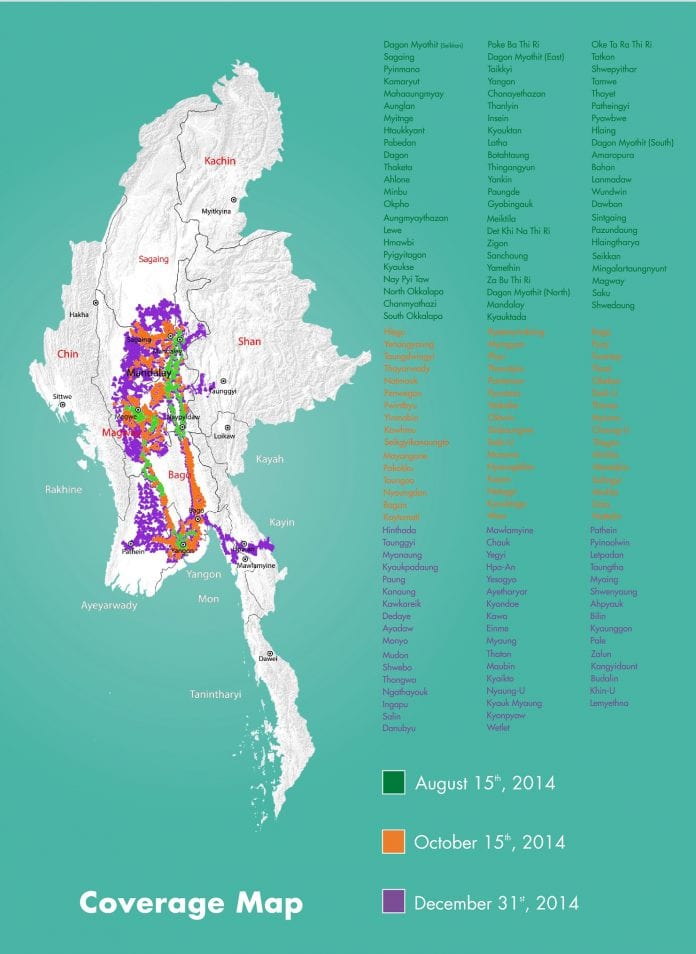 Despite hiccups in its network expansion, Qatari telecoms firm Ooredoo said it will cover almost half of Myanmar’s population by 2014.

Since rolling out its services three months ago, Ooredoo claimed that it has been “intensively carrying out constructing communication towers and structures.”

“With this rate, we expect to realise the projected coverage over 25 million people with clear voice and high speed internet communication services by the end of this year,” said Thiri Kyar Nyo, an Ooredoo Myanmar spokesperson.

The telecoms firm said it is trying to expand its high speed internet network throughout Myanmar, adding that it is also updating the public once a week on its network expansion process.

Ooredoo drew flak from many customers due to its patchy services in Myanmar’s commercial hub Yangon, despite its claims of “crystal clear voice and internet access wherever there is coverage.”

“The suggestions provided by the public through our call centre and facebook page have enabled us to improve with great speed,” Thiri Kyar Nyo said.

As of November 14, a new tower has been finished in Htantapin township in Yangon region. Coverage has also been reinforced by an additional network installed in each of the following locations – Chinatown in Lanmadaw township, Yangon port area in Ahlone township, north of Kyimyindaing township, Shwegondine road in Tamwe township, around Maritime College in Kamaryut township, Insein and Parami roads near Sein Gay Har shopping center in Hlaing township, Mindama road in Mayangone township, a highway heading north from Minglardon township and south of Thanhlyin.

In central Myanmar, Mandalay and Naypyitaw the network has been expanded in locations such as Yangon-Naypyitaw highway, Pyigyitagon township and Pathein Gyi township of Mandalay, Linkataw road in Monywa, Myingabar area in Chauk, north of Pakkokku, Magway-Taung Twin Gyi road, northeast of Taung Ngu, south of Naypyitaw, Naypyitaw-Mandalay highway and a highway between Pyi and Pale.