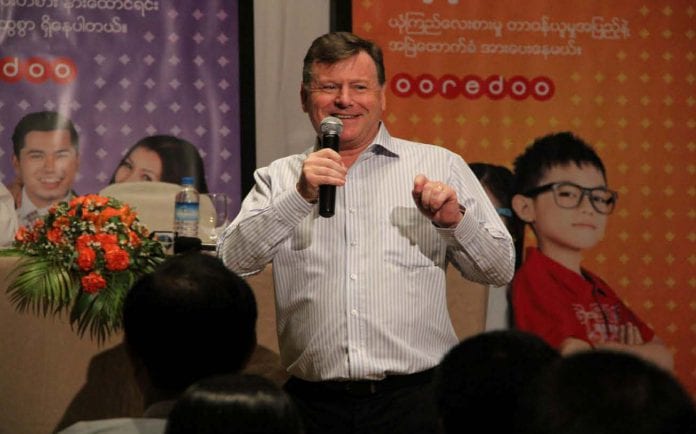 Ooredoo will launch 3G mobile SIM cards in Myanmar sometime between July and September this year, a top official said.

The Qatari firm will launch its services in major urban areas around Yangon, Mandalay and Nay Pyi Taw in the third quarter of 2014, reaching 30 percent of the population, Ross Cormack, chief executive officer of Ooredoo, told a press conference to update on progress of the company ahead of its launch of its services.

However, Cormack declined reveal the exact price of Ooredoo’s SIM cards, saying that the firm is still conducting a customer survey.

The teleocms firm, which won a licence to operate in Myanmar’s greenfiled telecommunications industry, said it has established data centres in Yangon and Mandalay and another one in Nay Pyi Taw is near completion.

The firm said it will build over 400 infrastructure towers and deploy 1,200 kilometres of its own fibre network to link its towers.

“So far we have built more than 100 towers, and we are going to have more by the end of the year,” Cormack said.

Ooredoo Mynmar formally got its licence to operate of February 5 following its successful bidding in a tightly-contested battle for telecom licences in June 2013.

After formally receiving its licence Ooredoo said in a statement: “… the company remains on track to meet its commitment to deliver … mobile communication services for Myanmar’s people in six months’ time.”

When the firm launched its official website in February, Cormack said: “From now on we must work … to launch after six months of the effective licence date. … We must keep our promises in delivering our services and products to the people of Myanmar.  Keeping the promises by word of mouth isn’t enough.”

Ooredoo’s Norwegian rival Telenor, which has about 150 million subscribers in Asia, the Nordics and central Europe, said it would launch voice and data service within eight months in Myanmar and expects to cover 90 percent of the country’s population within five years.

Cormack said Ooredoo is working on connecting to the existing mobile network of state-run Myanmar Post and Telecommunications (MPT) and that the firm’s network can already connect  to Telenor’s network.

Regarding user data protection, Cormak said Ooredoo owns its data centres and networks and user information will be safeguarded according to international law. “Even if the government asks for user data, we will not give them.”

Cormack placed a strong emphasis on the work that continues in the recruitment, development and training of its local Myanmar staff. Revealing that the company had over 600 Myanmar staff, working across all functions of the business, Cormack said they are the key ingredient to delivering ongoing success:

Whilst acknowledging that some challenges had been faced in terms of network rollout, Cormack said plans to introduce its service during the third quarter remained intact.