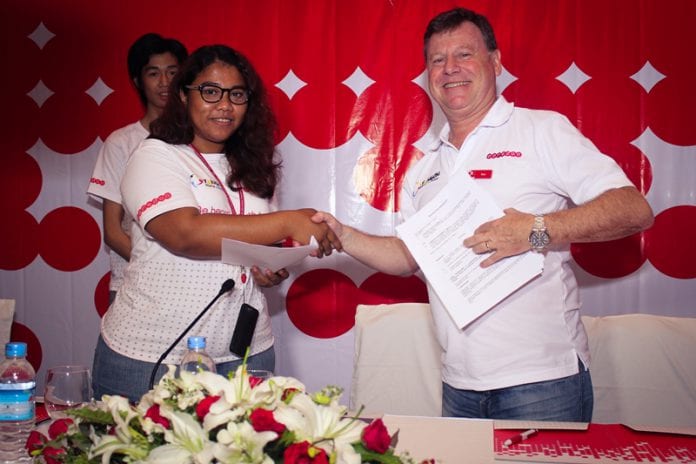 Qatar-based Ooredoo, one of Myanmar’s two telecom licence winners, will sponsor the 1st Yangon Youth Forum, the company has said in a statement.
The telecom company announced its $5,000 sponsorship for the two-day event, which starts on November 22, at a signing ceremony held at Park Royal hotel in Yangon. The forum will be held at Aung Myay Bon San Shan Monastry, 9 mile in Yangon.
Ross Cormack, CEO of Ooredoo Myanmar, said: “With this sponsorship, Ooredoo commits to empowering the youth of Myanmar by helping promote large-scale job creation, entrepreneurship, access to capital and markets, and the participation and engagement of young people in economic and social development.
“We believe young people should be given chances in life to educate themselves. It’s fantastic to see youth having the purpose and meaning in their lives so they feel they have had the chance to grow and fulfil their potential.”
The idea of the forum was mooted by some youth organisations in Yangon in June. The forum aims to create a youth network to solve community issues and strengthen youths’ social enterprises. It will select the youth delegates from Yangon region to attend Myanmar Youth Forum, and ASEAN Youth Forum, Asian Youth Forum and Global Youth Forum.
The topics of discussion at the forum will include education, youth opportunities, health and sports, prevention of narcotic drugs, IT and media, among others.
Ooredoo has been involved in a range of corporate social responsibility (CSR) activities since the announcement of its bid win on June 27. In September, Ooredoo donated $40,000 to the Ministry of Social Welfare for flood-affected people and formed a partnership with Cherie Blair Foundation for Women to train 30,000 women as mobile retail agents. Last month, Ooredoo announced its $50,000 sponsorship of the Special Olympics Myanmar National Games.
Following its licence win, Ooredoo said it will invest $15 billion and introduce 3G voice and data services in Myanmar.