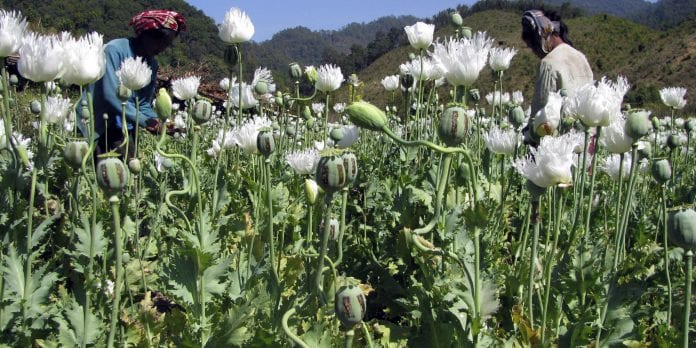 Opium poppy cultivation in Myanmar and Laos nearly tripled since 2006, propelling an illegal drug trade worth $16.3 billion, according to the UN Office on Drugs and Crime (UNODC).

Together, Myanmar and Laos produced an estimated 762 tonnes of opium, most of which – using smuggled precursor chemicals like acetyl anhydride – was refined into an estimated 76 tons of heroin and then trafficked to markets in neighbouring countries and outside the region, the report said.

UNODC said transnational crime groups are receiving profitable incentives due to the region’s large demand for heroin. There is a two-way trade involving chemicals going in and heroin coming out of the region, often dubbed as the “Golden Triangle,” challenging stability and the rule of law in the region.

Not only are they bringing in the chemicals needed to make heroin, but are also are trafficking and distributing the drug to markets in China, Southeast Asia and other parts of the world.

Shan State in the north of Myanmar, home to a number of conflict areas and insurgent groups, remains the centre of Myanmar’s opium and heroin activities, accounting for 89 percent of opium poppy cultivation in the Golden Triangle.

In Laos, the survey confirms opium poppy cultivation in the three northern provinces of Phongsali, Xiangkhoang and Houaphan.

In his forward to the report, UNODC executive director Yury Fedotov urged a comprehensive approach to tackle the varied but links aspects of the challenge, including dependence on poppy cultivation to offset poverty in some areas, the rise of heroin use in the region and its attendant negative health impacts, and the propensity of traffickers taking advantage of the region’s well-intended connectivity.

Economic surveys that were part of the report point out that for farmers in poppy-growing villages, the money generated from poppy crop cultivation is essential to prevent food insecurity and poverty, which illustrates the link between poverty, lack of alternative economic opportunities, and poppy cultivation.

The report also warned that the opium business and trade threatens regional integration. Development plans are underway to expand transport connections, and reduce trade barriers and border controls, including around opium producing areas.

UNODC said this carries the risk of providing organised crime networks opportunities to take advantage of the regional integration process.