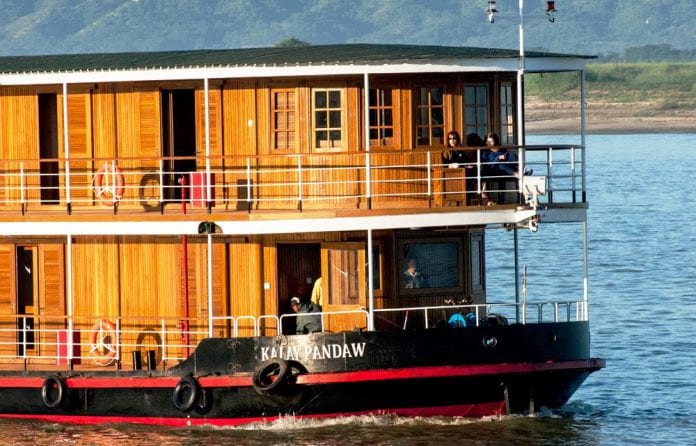 The ship was floated out on January 2, following several months of construction at the Sinmalike shipyard in Yangon. The hull and steel work was completed with machinery installed in three months and the outfitting will be completed by May, in time for deployment in July this year. The Kalaw’s sister ship, the Kindat Pandaw, will be launched from the same yard in three weeks.

Both new river cruisers will be 56 metres long and will feature 20 cabins. RV Kalaw Pandaw has two decks with 20 deluxe staterooms, a choice of indoor or outdoor bistro-style dining and other traditional features. The staterooms are 170 square feet and finished in teak and brass.

They will also feature a new design, with 80 centimetres draft, that allows them to sit less than one metre under the river’s surface, enabling the boats to visit shallower, less-accessible waters. This means the Kalaw Pandaw will be able to explore further up Myanmar’s Chindwin and Irrawaddy rivers than most other vessels.

“As more and more river cruise ships are announced, mainly for the now congested Bagan to Mandalay sector, Pandaw are maintaining their edge going further and deeper into the real Burma. As other ships get bigger and bigger Pandaw ships get smaller and smaller,” the company said.

“Pandaw is going back to how they started nearly twenty years, offering real river recess, utterly pioneering experiences into areas that have never seen tourists before,” it added.

Myanmar last year saw the largest number of visitors arriving via cruise ships into the country in a decade, according to the Myanmar Port Authority (MPA). From January to the third week of December, six cruise ships entered the country, and two more ships were supposed to arrive in the last week, carrying more than 4,000 tourists.

Incorporated in Singapore, Pandaw Cruises is an independent, family-run business, wholly owned by the Strachan family. Paul and Roser Strachan remain involved in ensuring that their standards are rigorously maintained and regularly travel on the ships taking a strong interest in their design and style.

As a family business the company has no leveraging at all, and thus runs on a very solid financial foundation. Paul takes care of the Pandaw Charity and a portion of the company’s profits goes into maintaining current educational and medical projects in Myanmar.

The old Irrawaddy Flotilla Company was revived in 1995 by Scottish Burma historian Paul Strachan. Pandaw was the first since the Second World War to offer cruises on Myanmar’s Irrawaddy River, reaching Bhamo, one thousand miles from the sea, and went on to be the first on the Chindwin river.

The Irrawaddy Flotilla Company was established by Scottish merchants in 1865. By the 1920s the company ran over 650 vessels on the rivers of Myanmar, and became the largest privately-owned fleet of ships in the world. Mainly paddle steamers, the largest class of vessels were 350 feet long and licensed for 4,000 passengers. In 1942 the fleet in its entirety was scuppered as an Act of Denial when the Japanese invaded.

In 1998 Paul Strachan discovered an original Clyde-built steamer called the Pandaw and arranged for its lease and restoration. Thus Pandaw was born.

Pandaw now has ten ships which they built themselves. Each ship is hand finished in brass and teak by traditional craftsmen. All Pandaws have ultra shallow drafts and can travel to remote areas, which would be unreachable by other vessels.

The Kindat Pandaw and Kalaw Pandaw are both designed as replicas of the Irrawaddy Flotilla Company ships of the 1920s. All of Pandaw’s ships are built new and designed and finished as replicas of colonial river steamers. These small ships have the highest space to passenger ratio of any ships afloat.

In 2003, Pandaw took its concept to the Mekong River in Indochina where in 2012 it had five Pandaws plying between Saigon in Vietnam and Angkor Wat in Cambodia. In 2009, Pandaw inaugurated new cruises on the Rajang in Borneo and Ganges in India. Although the company pulled out of India as a result of operational and safety issues.