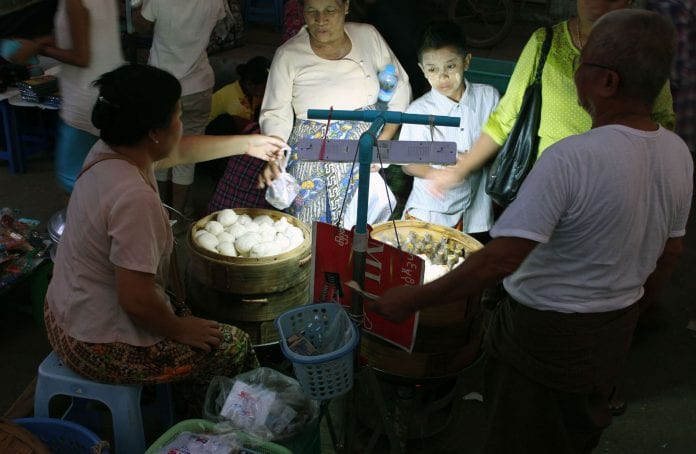 Food, Cosmetics and the likes must be viewed with a cynical eye in Myanmar, where a lack of control measure has led to a decline in quality assurance.

With rising incomes, too, come increased appetites for unique consumer goods, but the law has struggled to keep up. A suite of consumer protections have been drafted to put Myanmar's goods on the same level as Thailand’s or Malaysia’s, but enforcement has been so far ineffective.

The Consumer Protection Law, approved by the parliament and signed into law in March last year, promised to guarantee consumers that products and services would be safe by mandating safe production methods and product labeling for food under the authority of the Food and Drug Administration (FDA), and stricter standards for consumer products under the Ministry of Commerce (MOC).

Bylaws defining specific measures have been developed are about 70 percent finished, according to U Win Tint of the MOC. The bylaws are overseen by the Committee for Consumer Protection, which comprises senior representatives from various government departments.

The committee has made awareness programs concerning law and consumer safety to the public, but they have not been entirely effective. Complaints have still not emerged from consumers at a meaningful scale. That means consumers still are not completely aware of their rights under the law.

One provision in the law stated that name, size, weight, date of manufacturing, expiry date, allergy information and complete address should be described, but manufacturers and consumers still are not aware and do not comply to these regulations.

Ma Nilar, manager of one wholesale shop in Yangon, expressed the most common sentiment, “We have not heard that there is law of protection for consumers if the consumers had feel aggrieved.”

One official from of Myanmar's Food and Drug Administration who wished to remain anonymous said more and more illegal products have entered the country in recent years, only half of which are ever tested before being introduced to the public. It is a stifling and prolonged problem for officials, especially concerning snacks imported illegally from border areas.

U Aung Naing, vice president of Myanmar Consumers Union, told Myanmar Business Today, “It will take time to eradicate selling unsafe snacks at school shops. Consumers do not take dangers seriously and are not especially interested. They listen today and forget tomorrow. It is a weak point in the success of an awareness program.”

The Committee for Consumer Protection formed a Consumer Dispute Resolution Committee which has been tasked with solving disputes between manufacturers and consumers. This Committee will take responsibility to find solutions and take actions. Units to make complaints and solve disputes were established by Committee for Consumer Protection in all regions and states except in Kayin and Chin states, which are still working to establish committees. The committee theoretically has the power to imprison violators for up to three years or issue fines of up to K5 million, but there have been no complaints for them to act on yet.

Daw Ni Ni Win, a legal advisor, told Myanmar Business Today, “We have never heard of any action taken on manufacturers who do not take responsibility for their products. Not for services either. It is still impossible to apply these measures according to the law.”

This reflects an underlying problem, that in a country where the average wage struggles to exceed $100 per month, affordability is more important to consumers than quality.

U Than Soe, an economist at Yangon University of Economics, told Myanmar Business Today, “Affordability of consumer is also important. If income is sufficient, people can buy qualified products, so side effects can be reduced. People suffered undesirable direct effects and side effects because they used disqualified products as the income is low.”

Consumers suffer from unregulated consumer products in Myanmar today, adding to problems of food toxicity, lack of consistent quality, and poor nutrition. Whether there is the public will to solve these issues is another matter.