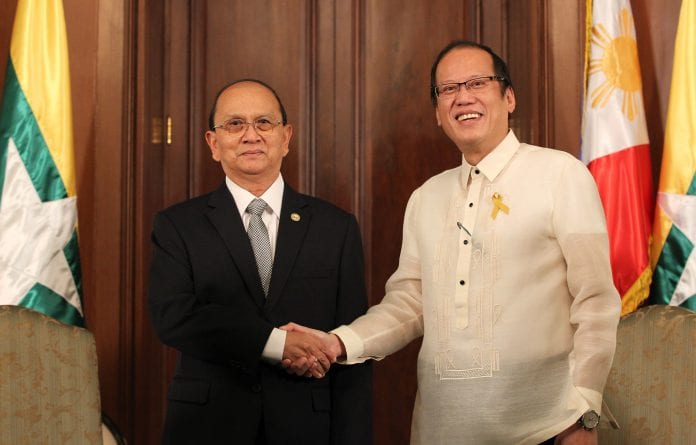 The agreements were signed in the fields of trade, investments, energy, agriculture, media and travel, officials said.

Under the memorandum of understanding (MoU) on food security, the two countries would work together to ensure food security and the promotion of investments through joint venture arrangements in the agricultural sector.

The MoU on information cooperation aims to provide an exchange of visits of journalists; cooperation between private radio and TV networks; sharing of best practices in media's role in national development and the peace process; and news exchanges, radio and television broadcasting, film industries, public relations, printing and publishing.

An MoA on visa-free entry to Myanmar that would allow Filipinos to stay in Myanmar for up to 14 days without the need for a visa was also signed. It also permits Myanmar nationals to visit the Philippines without a visa for up to 30 days.

The two countries inked an MoU on trade and investments which aims to facilitate the dissemination of investment information and consultations with the business community in the two countries.

The Philippine Chamber of Commerce and the Republic of the Union of Myanmar Federation of Chambers of Commerce and Industry also signed an MoA which enables both groups to establish business contacts via conferences, seminars, study tours, exchange of trade groups, and participation in trade fairs.