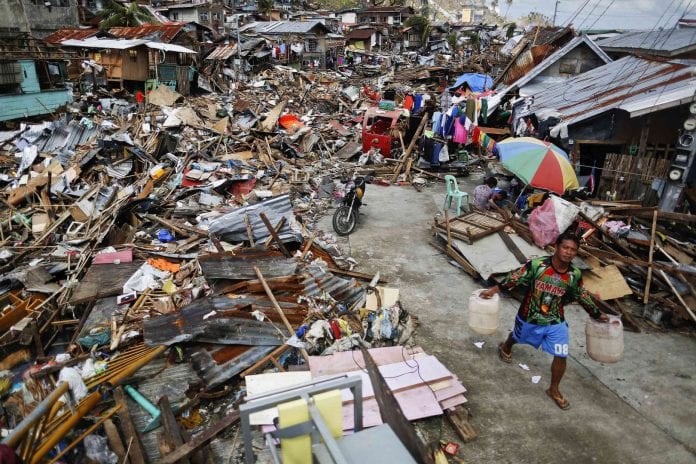 The Philippines’ National Food Authority (NFA) will import up to 500,000 tonnes of rice from its neighbouring countries, possibly before the end of the year, as it replenishes stocks that have been depleted by the ongoing typhoon relief efforts.
These imports by the Philippines, which are in addition to the 205,000 tonnes shipped in before Typhoon Haiyan struck on November 8, should help shore up Asian rice prices which have been held down by Thailand’s record high stocks.
“The NFA Council approved the additional rice importation in an emergency meeting last Friday. Vietnam, Thailand and Cambodia are qualified to make an offer,” Dennis Arpia, NFA senior executive assistant, told Reuters.
NFA Spokesman Rex Estoperez, in a separate phone interview, said the state grains agency needs to boost its buffer stock while its relief efforts in areas hit by Haiyan continue.
Thailand has already donated 5,000 tonnes of rice from government stocks to the Philippines and is considering selling more rice to Manila.
The Philippines, the world’s biggest rice buyer in 2010, had reduced imports to 1 million tonnes in 2012-13, according to the US Department of Agriculture data, in line with its drive for self-sufficiency by 2014.
In the 2012-13 marketing year, between 400,000 and 600,000 tonnes of rice could be smuggled into the Philippines, according to a report released early this year by the United States Department of Agriculture, citing local industry estimates.
“We need to make sure we have a healthy buffer stock,” said Estoperez, though he added that the NFA still has to make further assessment to figure out if it will have to buy more after importing an extra 500,000 tonnes. “We need to know what our inventory will be at the end of the year.”
Unmilled rice production in the entire year is forecast to reach 18.58 million tonnes, the Bureau of Agricultural Statistics said on November 15, below the government’s target of 20.4 million tonnes under its rice self-sufficiency programme.
Actual rice output for the year however may fall below the latest forecast, taking into account crop losses in the fourth quarter, including those in storm-ravaged central Philippines.                                      Reuters