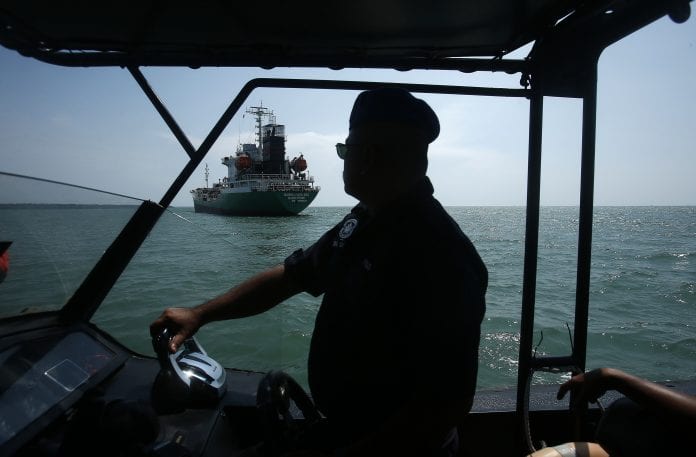 Armed pirates raided an oil tanker off the coast of Malaysia and took three crew members with them, Malaysian maritime officials said on Wednesday last week, underscoring increasing threats to shipping in one of the world’s busiest waterways.

The incident in the Malacca Strait, a route for about a quarter of the world’s seaborne oil trade, has fuelled fears piracy could be on the rise in the area and drive up ship insurance premiums.

Eight Indonesian pirates in a fishing vessel boarded the Naniwa Maru No.1 at 1am local time last Tuesday off the coast of west Malaysia while the ship was sailing from Singapore to Myanmar, the Malaysian Maritime Enforcement Agency said.

“We are very concerned,” said Noel Choong, head of the International Maritime Bureau’s Malaysia-based Piracy Reporting Centre, who added the ship was hijacked while sailing near the Malaysia town of Port Klang.

“It’s the first time this has happened so far north in the Malacca Strait, and the first time they have kidnapped the crew. It’s not an area where we have seen the modus operandi of ships hijacked for their cargo,” he told Reuters.

The pirates pumped out about 3 million litres of the 4.5 million litres of diesel carried by the tanker into two waiting vessels and made off with three Indonesian crew members, including the captain and chief engineer, the agency said.

“There is a possibility that the abducted crew was involved in the hijack based on new leads and that their personal documents, clothes and belongings were taken along with then,” the agency said in a statement.

The Saint Kitts and Nevis registered oil tanker had been towed to Malaysia’s Port Klang for further investigations.

Malaysian authorities are now working closely with their Indonesian counterparts to track down the two vessels and locate the missing crew.

Regional security officials have previously told Reuters that armed gangs prowling the Malacca Strait may be part of a syndicate that can either have links to the crew on board the hijacking target or inside knowledge about the ship and cargo.

Such intelligence-led hijacks have involved seizing tankers so that gasoil cargoes can be transferred and sold on the black market, the officials, who declined to be identified because they are not authorised to speak to the media, have said.

The stolen cargo is worth about $2.5 million, based on the average price of diesel this year in Singapore, data from British shipping services firm Clarkson shows.

The tanker is managed by Singapore company Pantec Chartering which was unable to comment when contacted by Reuters. The 4,999-deadweight tonne vessel had an 18 member crew of Indonesian, Thai, Myanmar and Indian nationals.

Insurance sources said the incident was unlikely to spark an immediate increase in premiums, but insurers would be concerned if there were several more hijackings.

Previous tanker hijackings and cargo thefts have taken place closer to Singapore, with five such incidents between 2011 and 2013, according to the government-to-government body Regional Co-operation Agreement on Combating Piracy and Armed Robbery against Ships in Asia (ReCAAP).

There were eight armed robbery attacks in the Malacca Strait and around Singapore in the first quarter this year, compared with one in the same period last year, Singapore-headquartered ReCAAP said, although most were small thefts.                           Reuters