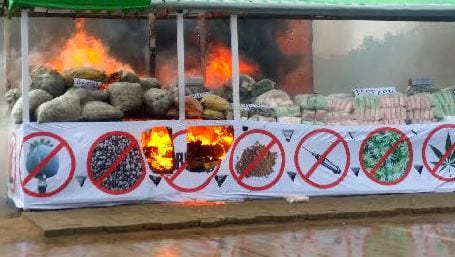 Drugs worth K17.68 billion ($155.8 million) were destroyed at a public event in Hlaing Tharyar township in Yangon recently.

The drugs were those seized in arrests across the country.

Colonel Win Naing, commander of Yangon Region Police Force, said, “People living in border areas will know the real attitude of government now. They must reduce plantation of opium and substitute it with other agriculture and livestock. Moreover, the Myanmar Police Department, Armed Forces and people are cooperating for the eradication of drugs.”

The drugs are seized from Yangon, Tanintharyi, Bago and Ayeyarwaddy regions, and Mon and Kayin states. He said this is the fifth time the police has publicly destroyed drugs in Yangon region.

Major Khin Maung Thein, chief of Yangon Police (West), said, “Drugs are more available in border areas. Illegal investments from foreign countries are coming in as there are rebels in border areas, especially along the Shan border. There are people from the other side coming in and entering the drug business here.”

He said that the government is trying to make peace with ethnic armed groups, and if peace is made, the drugs in border areas will be eradicated.

A total of 29 types of drugs such as heroin, raw opium, opium oil and amphetamines were destroyed.