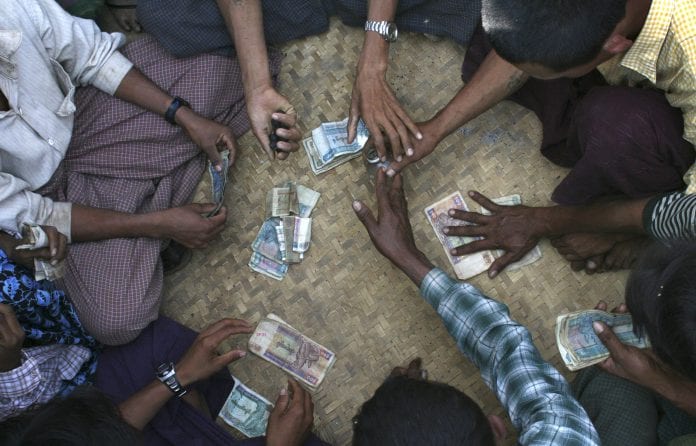 Police seized K15 million ($15,000) from 157 illegal gambling operations in 12 states and regions in October, according to the police headquarters in Naypyitaw.

Ninety-five cases involving lucky-draw gambling, 28 cases of playing card gambling and other 34 illegal gambling cases uncovered in October around the country have led to the seizure of the money, the police said.

A total of 348 suspects had been arrested in the 157 cases uncovered in Naypyitaw, Yangon, Mandalay, Bago, Magway, Sagaing, Ayeyarwaddy and Tanintharyi regionas and Kachin, Kayin, Mon, Shan and Rakhine states.

“We are trying to eradicate gambling throughout the country. The public also needs to avoid these gambling activities as best they can to alleviate poverty,” lieutenant colonel Min Aung from Myanmar Police Force told Myanmar Business Today.

“Many other unwanted crimes can stem from gambling activities. So as we are carrying out community policing, we request the citizens to inform the nearest police if they have knowledge of any ongoing gambling activities,” Min Aung added.

To combat illegal gambling, state and regional police forces are implementing campaigns in which money seized from discovered cases will be confiscated as state property.

A bookie based in Thingangyun township told Myanmar Business Today on condition of anonymity that he has to be careful as security has been heightened.

“As there have been arrests and crackdowns, I have asked others to notify me in cases of raids,” he said.

“But I am just a low-level bookie. There are many big ring leaders downtown.”

Myanmar Business Today reported earlier that the authorities are preparing to loosen restrictions on some types of gambling and allow three-star hotels in border areas to open casinos. However, only foreigners will be allowed to gamble in those casinos while locals will be banned from taking part, U Sai Kyaw Ohn, deputy minister for hotels and tourism, said.