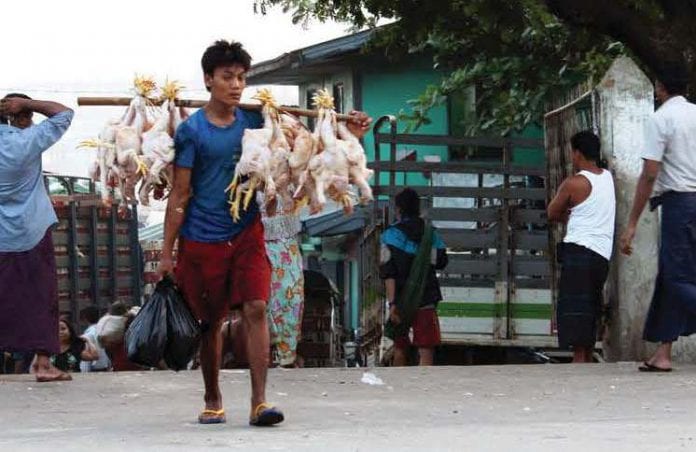 Domestic poultry consumption has seen a 20 percent year-on-year increase since 2012, according to Myanmar Broiler Association.

However, meat shipments to foreign countries remain distant given the industry’s small size and low productivity. In order for the industry to increase productivity and expand into international markets, the government’s financial support and land distribution are essential for small individual poultry farms to transform into large-scale production, experts say.

Increased poultry consumption has been driven by the slowing of pork production after bouts of blue ear disease, also known as Porcine Reproductive and Respiratory Syndrome (PRRS), and the decrease in the production of fishery products.

After large foreign companies, such as Thailand’s CP, entered Myanmar’s poultry market, corporate farming methods and processing plants have been introduced into the industry.

Local producers still need to work towards improving their farms to enhance the quality of their products and be competitive ahead of integration into the ASEAN Economic Community (AEC).

“Although there was an outbreak of wryneck disease this year, it didn’t affect the demand because the disease is only harmful to chickens – not consumers. A reason for increased poultry consumption is that the production cycle for chicken takes only 45 days, while pork and beef take eight and 14 months to produce, respectively,” said Dr Hla Hla Thein, chairperson of the Association.

Because expanding the size of poultry operations has the positive affect of increasing productivity, and thus reduce costs, poultry producers suggest the government should allot land for the expansion of environmentally controlled poultry farms in the environs of cities and towns.

This can be an important step towards developing wholesale markets, which will promote poultry exports to foreign markets, industry players say.

“To operate environmental friendly farms, the government should approve the establishment of poultry sheds on crop fields outside of cities,” said Dr Hla Hla Thein.

The government is planning to establish a wholesale poultry market in a 58-acre area at the junction of Shwe Pyi Thar and Insein by 2015, which will also include cold storage rooms.

Myanmar Livestock Federation’s vice chairman, U Win Sein, said that a masterplan for meat production is being devised with a focus on the promotion of exports.