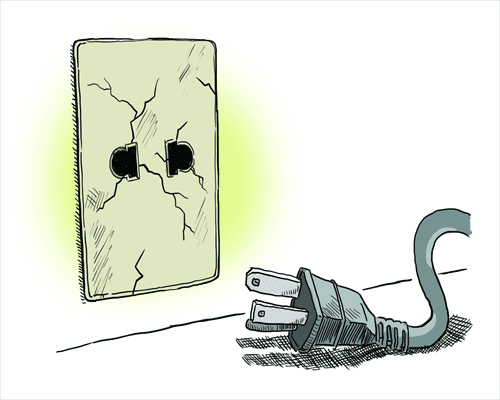 The recent protests in Yangon against a hike in electricity charges have shed some light on Myanmar’s serious power crisis.

In the past three years Myanmar has witnessed the suspension of the Chinese-invested Myitsone dam project, mass demonstrations against blackouts in big cities like Yangon and Mandalay, and protests against the rate rise.

Electricity is very important for the development of the nation, but the country faces power shortages, a complex investment environment, and difficult local conditions. Myanmar urgently needs to tackle these problems.

Electricity is only available to 30 percent of the population. The lack of power for both industrial and household use keeps investors away.

There are two main reasons for this power shortage. The country doesn’t have adequate power supply, and its electrical power grid is outdated.

There is no unified, high-voltage power transmission network in Myanmar. Even if there was enough power produced, the customers in border areas couldn’t be reached because of inadequate transmission lines.

Myanmar needs to improve its transmission networks based on economic development and power demands in different regions.

In the past decades, many countries in the world have prioritised the development of their water resources. The average hydropower utility rate in the developed countries has reached 70 percent, while in Myanmar it is less than 3 percent. That’s partly why Myanmar faces this awkward situation.

Catering to the public’s demands over electricity prices is another issue. Currently, Myanmar’s rate is K35 ($0.036) for household subscribers per unit. Even though more than 70 percent of electricity in Myanmar is from cheap hydropower, the government still has lost an average of K22 per unit and K185 billion per annum according to local media reports. The electricity generated from other sources such as coal, natural gas, solar and wind would cost much more.

At present, the Myanmar government can still manage to subsidise 10 billion kilowatt hours per year, but if power consumption increases sharply in the future, and it is currently estimated to grow at 15 percent each year, it will be unsustainable for the government to continue these subsidies and it will eventually have to increase electricity prices. However, the recent proposal for a price hike was strongly opposed by the public.

An advisable solution is to develop cheap and renewable power sources. The production cost of hydropower is only 25 to 50 percent of other types of power generation, such as solar, wind, gas or coal-fired power. Taking advantage of rich water resources is undoubtedly a long-term choice. “It will be unrealistic if there are no more subsidies to develop large scale wind or solar-power in Myanmar,” said one Western investor attending the Myanmar Energy Investment Summit in Yangon on September 3.

When developing hydropower, more attention should be focused on large projects rather than small ones. River hydropower plants will be operated at a low level in the dry season when Myanmar’s rivers are running at low flows.

Large reservoirs are helpful in adjusting flows, generating more power for the system in the dry season as well as controlling floods in the rainy season. It is also beneficial for navigation and irrigation.

Generally it takes 20 to 30 years, or even longer, to recover the cost of power projects. So a stable and reliable investment environment is of particular importance in attracting investors.

The development of mega hydropower projects has been in stagnation since the suspension of the Myitsone dam project. Irresponsible remarks about the project and Chinese investors are common in the local media while rational reflection is uncommon. Such an environment is a hot potato for investors.

The development of all projects has certain environmental and social impacts. An objective assessment from comprehensive analysis should be based on justifying the feasibility of the projects. Demonising hydropower development or prejudice against investors from a certain country is undesirable, and will not only hurt the investors but also jeopardise the interests of the public and the nation.

Some analysts hold that controversies over environmental protection, security and culture concerning the Myitsone dam project are only superficial. They say that the essence of the problem is that politics erodes economic development for the personal gains of some politicians.

Some environmentalists have also pointed out that the eco-environment of the Irrawaddy River region has continually deteriorated in the past decades due to floods, droughts, deforestation for farmland reclamation, over-hunting, and gold mining.

Constructing large reservoirs could adjust floods, meet the demand of electricity for industrial development along the river and create more job opportunities to help locals to abandon their outdated and environmentally-unfriendly way of life. In this sense, hydropower construction is not contradictory to environmental conservation; the two can mutually advance.

The public desire to escape darkness cannot be ignored during Myanmar’s democratic transition. It’s time for Myanmar to face up to its power shortages.

The author is an employee of a Nay Pyi Taw-based company. Views expressed here are his own.