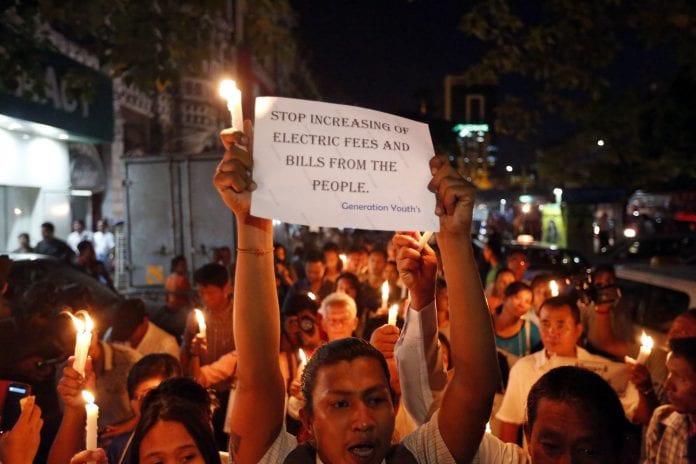 Last November, residents of the new, more democratic Myanmar took to the streets. In Yangon – the most highly electrified city in the country – protestors were angry about the government’s plans to raise electricity prices. The protests were illegal since the participants lacked government permits. Even still, the protests worked: the government backed down on price hikes. This wasn’t the only protest over electricity: others were protesting to gain access.

A few months earlier, the government put out a tender for a gas-fired power plant outside of Mandalay. With the easing of sanctions, Florida-based APR Energy was able to participate in the process, winning a contract to supply power and serving as a potential case study for entry into the once off-limits market.

By next month, the results of another tender – this time for development of offshore oil and gas development – should be released. International companies have lined up for the opportunity to develop these fields and the Myanmar government has indicated that at least some of that gas will go towards domestic uses.

For the newly opened country with a tremendous opportunity for growth, handling these three areas well – pricing and access to electricity, interest in the power sector by independent power producers (IPPs) and a nascent oil and gas sector – are integral for Myanmar’s future development.

Turning on the lights: An angry populace

The protestors marching to stop the government from raising electricity tariffs last November represent an elite minority in Myanmar, but not in the way that Americans think about privilege and the wealthy one percent. Rather, this elite minority had one identifying characteristic: intermittent access to electricity.

The government backed down and kept prices low – artificially low. Electricity is highly subsidised in Myanmar: the government sells electricity for less than it costs to produce it, by some accounts consumers pay only 33 percent of production costs. Electricity tariffs in the country are some of the lowest in the world, according to Vikas Sharma, an associate director at Frost & Sullivan in Singapore. The low prices exacerbate Myanmar’s bigger problem: less than 30 percent of the country is connected to the power grid.

“Providing heavily subsidised electricity has debilitated the power ministry’s (MOEP) fiscal situation, and rendered it unable to invest in increasing capacity and upgrading distribution networks,” Sharma told Breaking Energy by email. The protests may keep electricity out of the reach of their compatriots, as power producers and the government, in desperate need of revenue streams that exceed production costs, cannot afford to increase capacity.

At the same time, Yangon is dealing with protests from those without access to electricity. Citizens are angry that 70 percent of the country remains without access and even more so that some of the electricity produced within Myanmar is exported outside its own borders. One US-based expert who asked not to be identified for fear of angering the Myanmar government said that many in the rural areas have simply given up on hopes that the government will provide them with electricity.

The challenge: Electrification of 70 percent of the population

Myanmar sits on potentially huge deposits of natural gas and to a lesser extent, oil. Either could be deployed to electrify the country. However, most of Myanmar’s electricity comes from hydropower (the country has only 10 gas-fired power plants with 834MW of installed capacity and a sole coal-fired power plant). Relying on hydropower poses tremendous challenges during the dry season when almost 75 percent of the country’s power is either substantially reduced or entirely offline. During the dry season, some households can expect just one hour of electricity a day.

Natural-gas fired power plants aren’t much better; highly inefficient and aging, experts say 44 percent of this capacity is unavailable. Of the 3,495MW of installed capacity, the Asian Development Bank (ADB) says only 56 percent of this is “firm capacity.” Another tenth of that is destined for exports. Even the country’s three oil refineries run at just 41 percent utilisation, according to a World Economic Forum report.

Beyond the unreliability, Myanmar has the highest percentage of its population without access to electricity of ASEAN countries. Its power consumption, as measured in kWh per capita, stood at 110 in 2011. That’s higher than Haiti, Ethiopia, Tanzania, the Congo and Nepal, but still well below the low-income country average of 232 kWh per capita, according to the World Bank.

Even for those with access, supply is unreliable. Load shedding happens 20 percent of the time with transmission and distribution losses causing another 19.43 percent loss, according to the Ministry of Power. For such a small base to begin with, losing this much power is highly problematic.

Energy consumption can be broken down into a few simple categories:

– Those without access to the grid rely on wood and expensive diesel-powered generators and small-scale solar, according to experts.

– Those with connections to the grid rely primarily on water from hydropower.  Limited supplies come from natural gas and coal, despite domestic resources.

– Future power is likely to come from hydropower and natural gas.

For Myanmar’s new government, fixing unequal access to power – Yangon has 67 percent of its population connected, versus under 30 percent for the rest of the country – and balancing the need to increase capacity without destabilising its citizenry will be the key economic development task.

This article is the first of a series in Breaking Energy on Myanmar’s power sector. It was originally published in Breaking Energy’s website and has been republished with the publication’s permission. The three-part series aims to look at the dynamics of Myanmar’s power sector, what’s driving change, how foreign investors are getting involved, and the challenges facing the government. Myanmar Business Today will publish the rest of the series in the following weeks.