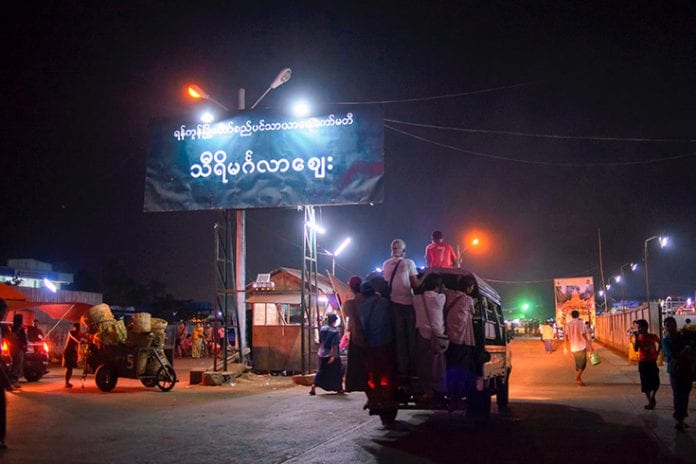 Myanmar has one of the lowest electrification rates in the world. Even with gains in recent years, only 33 percent of the population has an electricity connection. While this rate is higher for the major cities, large parts of rural Myanmar have almost no electricity at all.

Lack of power threatens Myanmar’s economic transition. It restricts the expansion of infrastructure projects, puts industrial development on hold, and slows down job growth. In rural areas, schools and clinics operate with little to no power.

As part of this effort, the World Bank Group and its partners are working with Myanmar’s government to develop and implement a National Electrification Plan. The goal: universal electricity access by the year 2030.

The draft Plan was presented to the government in September, and makes it clear that this will not be a small feat. Approximately 7.2 million new household electricity connections will be required by 2030. To achieve this will require an average of 450,000 new connections per year – more than double the current rate of expansion.

However, as the Plan makes clear, with continued government commitment, targeted sector policies, and financial support from donors, universal electricity access in Myanmar is both achievable and affordable.

“It builds on some real strengths: a very engaged government and strong international commitment, including that of the World Bank Group. And it puts into practice what the Bank Group and our partners do best: adapting global solutions to the specific needs of a country.”

The National Electrification Plan envisions expansion of Myanmar’s electricity grid, using geospatial mapping techniques to ensure the grid is rolled out at least cost. At the same time, the Plan calls for mini-grids and off-grid solutions such as solar home systems to be developed for more remote locations to ensure that these areas are not left behind, and receive basic electricity services such as lighting and charging for small appliances and mobile phones, while the grid is being built out.

The total cost of the 16-year rollout is estimated at $5.8 billion, in addition to the generation and transmission investments required to meet the resulting energy demand.

To make such an ambitious rollout possible, an investment prospectus has been developed for the first five-year stage, from 2015 to 2019. The prospectus recommends 1.7 million new electricity connections to be created during this period, and $700 million in investment and technical assistance to be mobilised from development partners, government and the private sector. During this period, technical and commercial personnel at the national and local level would be trained to manage the fast ramp-up of connections envisaged for the later stages of the plan.

“It is critical for continued inclusive growth to keep electricity tariffs affordable, including for the poorest, while accelerating the expansion of energy services.”

The development of the National Electrification Plan was undertaken by a joint World Bank Group team with technical and financial support from the Sustainable Energy for All Technical Assistance Program of the Energy Sector Management Assistance Program (ESMAP).

Sustainable Energy for All, or SE4ALL, is a global initiative with three overarching goals to be reached by 2030: universal energy access, doubling the share of renewable energy in the global energy mix and doubling the rate of improvement of energy efficiency. Myanmar was one of the first countries to opt in to this initiative and is considered a “high potential” country under SE4ALL.

“Myanmar is the first SE4ALL country that has completed a national action plan and investment prospectus towards the goal of universal energy access,” said Rohit Khanna, program manager for ESMAP.