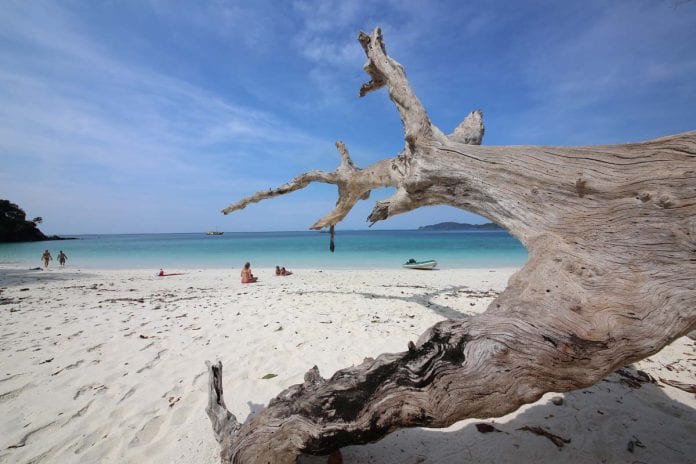 The Myeik Archipelago is home to 700 coral, invertebrate and fish species, along with other unidentified specimens that may prove new to scientists. Tourism in the area relies on the attraction from pristine nature and the community. However, the main attractions may not prove sustainable due to threats to the environment and the unequal treatment to the local community in the different industries that operate in the area.

Tourism in the area is based highly on multi-day yacht packages, where visitors get the opportunity to explore various islands. While some yachts are accommodated with modern facilities, others companies, such as Island Safari Mergui, have further adopted the pitch of assuring the visitors to feel “the same sense of adventure the great explorers have felt 200 years ago.”

“With only 2,260 tourists visiting the islands each year, the focus should be on protection of the environment and the safety of the tourists and locals rather than on banning tourism,” U Thawtar Nyunt, managing director of Elegant Myanmar Tours, which operates in the region, told Myanmar Business Today. Tourism in the area can provide job opportunities to the locals, he added.

Another major obstacle for increasing tourism in the archipelago is the cost of the basic necessities such as water, where water bottles are sold for K3,000 each. These high costs have not allowed much local tourism in the area. This issue will prevail until the carrier speedboats are replaced with ships for transporting goods such as water, said U Thawtar Nyunt.

A major threat posed by the growing tourism is the anchoring process for the yachts, as these yachts may anchor on corals, according to Robert Howard, marine programme adviser from Fauna and Flora International, a UK-based environmental advocacy group.

Although the tour companies are aware of the issue, efforts to anchor on concrete blocks and floats have been disrupted by these resources being stolen, according to U Thawtar Nyunt. In addition, the visitors that usually visit the islands understand value the environment and the need to protect it. “In fact, they have scolded divers before for bringing out exotic shells from underwater to show off to tourists.”

Other concerns associated with the rising hotel and tourism industry include the need for wastewater to be properly disposed and tourists throwing plastic into the sea.

However, fishing industry is causing the most immediate of threat to the marine environment, Howard told Myanmar Business Today. “There are too many fishing boats, with no enforcement and a lot of destructive equipment. Some fishing companies are using dynamite fishing techniques, or big trawlers near the shore.”

Because of the fishing industry, the number of big fish in the Myeik Archipelago has dropped enormously. According to the Shark and Ray Fisheries of Myanmar Report by FFI, no sharks were observed during 200 transect surveys of the coral reefs between 2013 and 2015. There has been no extensive data collection on the population count of specific species of fish exists in Myanmar.

“The Fisheries Department under the Department of Livestock and Fisheries is the organisation in charge of controlling fishing, but they have very few resources, so they can’t go patrolling. The capacity and the enforcement of the laws is quite low. There are people within the department who are very keen and are trying very hard now to address this problem. The biggest problem is that all these fishing boats are all owned by powerful businesses so to stop them from fishing is very hard,” said Howard.

Other industries in the area, such as shrimp farming, also cause damage to the marine ecosystem by killing mangroves, which are an essential part of the ecosystem, in order to clean the area for the farming process.

In order to aid the community in the area, the FFI has developed plans, called the “Locally Managed Marine Area”, in which the organisation targets three islands where it manages between the local community and the fisheries, on whether the locals will have the area for themselves or fishing will be banned.

The government, as of now, has limited logging and hunting in certain islands of the archipelago, and marked the Lan Pi island as a nature park. However, “the main focus of the government seems to be security and earning revenue rather than preserving the environment,” said Howard.

Seeing that government input on the issue is limited, local and foreign tour companies along with conservational NGOs such as FFI have started to take their own initiatives.

Elegant Myanmar Tours, which runs the Mergui Princess has taken measure for raising awareness among the locals through seminars and bilingual posters around the islands that fall on the route of their tour. However, U Thawtar Nyunt admits, “The impact of this is rather limited as these events occur once in a while. The government should be taking more responsibility in protecting the environment and the natives.”

Plight of the “Sea Nomads”

Howard and Thawtar Nyunt both said that the situation of the Moken community, an ethnic group who maintain a nomadic and sea-based culture and among the few remaining hunter-gatherer populations in Southeast Asia, to rather resemble a zoo as the tourists come to pictures but leave nothing in return for the society to build clinics, schools or infrastructure for the development of the society. They emphasised the need to give equal benefits from tourism to the Mokens, through means such as but not limited to collecting fees.

Additionally, some fishing companies use barrier nets across the bays to trap all the fish in the area, leaving little or no fish as a source of food for the Moken communities. The unequal gain of profits and resources between the fishing companies and locals may threaten the sustainability of these communities and their traditions.

“Far from the idyllic image that tourism promotes of the Moken people, these sea nomads face increasing restrictions and attacks at sea, and systematic discrimination on land,” said Brad Adams, Asia director of Human Rights Watch in a statement late last week.

In the tourism sector, the Mokens do not have even the roles of local guides in the area as most do not know how to speak Burmese or English, but with the upcoming generation of Mokens being educated in Burmese schools, the tourism sector should bring several opportunities for them, said U Thawtar Nyunt.

“If the community does not see any incentives in retaining its traditional ways for tourist attraction, then Mokens will not remain the same for the coming decades, as they are permitted into the borders of Thailand, Myanmar and Malaysia. … the opportunities and the influence of modernisation is large from all borders. If the Mokens are not given benefits, the community may not see any point in retaining their culture.”