Prospects for Women in Changing Myanmar 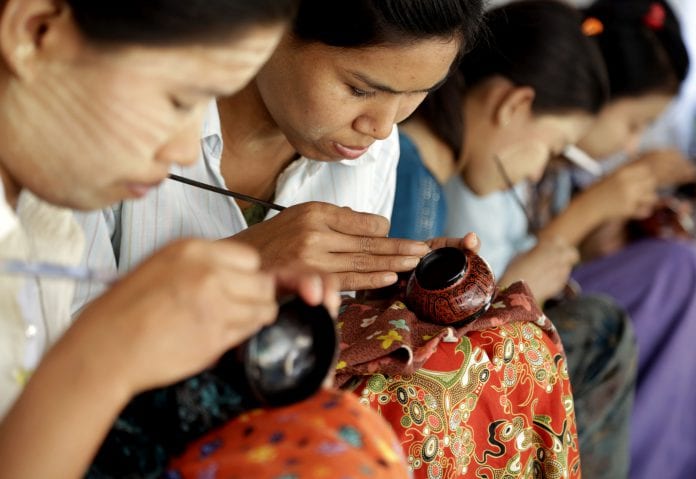 Myanmar has undergone huge changes in recent years in an attempt to open the country’s doors to foreign investment and catch up with the increasingly modernised world. Looking at the largest city, Yangon, it is obvious that modernisation is creeping into the country, with multinationals including Mercedes, Chevrolet and Hilton entering the market, with many new hotels opening to accommodate the heavy influx of foreigners each year.

While these new foreign companies undoubtedly create new jobs for the local people, it usually favours those who have had the privilege to pursue a higher education, particularly those who have studied or worked abroad and can speak fluently in Burmese and English. In Myanmar, women are traditionally taught to be gentle and obedient, and were discouraged from being career-minded as it is thought to be the business of the men. According to information from the International Monetary Fund (IMF) website, while two-thirds of women work, which is often at roadside stores and sometimes building roads in rural areas, they are engaged mainly in unskilled work at a low, unstable salary. With a meagre 18 percent of women in the country having secondary education or higher, according to the IMF figures, the vast majority of women, usually in rural parts of the country, lack specific and relevant skills for white- collar jobs that earn better pay. This contributes to a widening income gap between the rich and poor, especially with the opening up of Myanmar’s markets to foreign investment, which usually provides better paying jobs for skilled workers.

In order to gain an insight into the challenges faced by women in the workforce, I interviewed a number of career women within the country who have climbed their way to the top of their respective fields and become successful entrepreneurs, professionals, managers and directors.

With gender discrimination prevalent across much of Asia, one may expect it to be rife in Myanmar. However, the general consensus of the interviews was that it is not seen as a huge issue by the women I interviewed and, on the whole, women are well-respected by men and are considered, on most parts, equal to that of men. A prominent example would be that of the popular leader of the opposition, Aung San Suu Kyi.

In the workforce, such as the private sector, there appears to be virtually no gender discrimination, especially in the upper management, as individuals tend to be more liberal and open-minded. Performance, it seems, is the most important criteria for promotion in this sector and an equal amount of respect can generally be expected from the other party. However, there are some limitations in the government and public sector where gender may play more of a role in deciding promotions. This is partly due to senior official positions usually requiring military experience or connections that women may lack in comparison to men, as well as the capabilities of women not being given as much recognition by senior executives as it is in the private sector. Improvements in these sectors are slowly making their way through the changing of laws to allow women ministers in previously all-male ministerial roles.

At universities in central Myanmar, while the amount of female attendees and applicants are higher than that of males, entrance marks for certain courses, such as Medicine, are set significantly higher for females than for males. However, with the education sector slowly changing and being improved, as well as previously male-only courses being opened up to include females, gender equality in terms of education is on its way. Ying Chua, one of my interviewees, noted that an engineer in charge of renovations for her recently opened fast-food restaurant, Harleys, was a young woman. Hence, evident changes in the education sector are showing, where more women are working and leaving their marks in male-dominated industries, such as engineering and construction.

In terms of hiring staff, according to several business women, they revealed that while the basics of education are important, most employers will hire based on the candidate’s willingness to work and be trained. Though, of course, for more skilled or specific jobs like accounting, experience and higher qualifications are a deciding factor. For hotels like Chatrium Hotel, as the Marketing Communications Manager in the Yangon branch Thinzar Myat Mon shared, ascending to a senior executive level usually requires good experience plus higher education beyond a university degree, such as a Master’s Degree in respective areas such as Business Administration.

While there may be occasional gender preference when hiring for stereotypically male jobs, for example in the fields of architecture or construction, it is not as prevalent with qualifications and experience is slowly starting to have more emphasis. Hence, many businesswomen are confident that as Myanmar continues to grow and progress, especially with more international businesses establishing offices in the country, they will bring along their own work culture and norms that will lead to increased foreign interaction. With the introduction of more international norms and work culture, gender discrimination will be lessened and as individual capability and contribution will be given more focus.

When asked about how most career women juggle family and work responsibilities in Myanmar, it was shared that most of them either work with their husbands in their own business or have husbands who do not mind them working as long as they are able to perform family duties, such as looking after the children, though some do hire domestic help to assist them. In some cases, it is the women who become breadwinners of the family, and many of them constantly try to find a balance between family and work.

While it cannot be expected in Myanmar for there to be full equality in marriage, Veronica Aw, among other businesswomen and entrepreneurs, believes that men and women should aim to share family responsibilities in a marriage, rather than the woman being the only or sole family caregiver. A working mother would be unlikely to be able to devote 100 percent of her time and effort to her children, so she believes responsibilities between both parents should become more equalized especially in a rapidly growing economy that brings about rising costs of living.

As for the issue of unskilled and lowly educated women in more rural areas of Myanmar, associations like the Myanmar Women Entrepreneurs Association (MWEA), which was formed in 1995, help organise workshops and courses that teach important and relevant skills like English Language and email correspondence for these women, as well as try to ensure more girls are able to continue studying these skills.

When asked about their thoughts on women’s role in the workforce in five to ten years’ time, all interviewees were positive that women would play a larger role in the workforce as policies and mindsets are starting to become more equalised and liberal, as well as increasing living costs putting pressure on both women and men to achieve better-paying jobs. It was also predicted by Daw Lynn Lynn that there would be more women managers and directors in the future, as she believes Burmese women are hardworking, and would hence climb their way to upper management more easily.

“Women, or anyone for that matter, who are determined and hardworking in their goals will definitely be able to climb their way to the top,” the founder of her own auditing firm Daw Cho Cho Toe said, and her ideals were also reinforced by many successful women I had the pleasure of talking to.

It is only when one dares to chase their passion that one is determined to pour their heart into it, and have their passion drive their careers and life, not being afraid to face difficulties and challenges head-strong, like the women I interviewed have demonstrated, and from it, success will come inevitably. “Men are not prisoners of fate, but only prisoners of their own mind -Roosevelt”: this way of thinking has to be influenced into the mindsets of current and future generations of girls by the government’s future policies and actions, as well as with the assistance from associations like the MWEA, and encouraged by families to ensure upward social and economic mobility of women in Myanmar.

Tan Ren Rong has interned at Consult-Myamar Co Ltd, a business consultancy based in Yangon. She is planning to pursue a Diploma in International Business in April 2014.