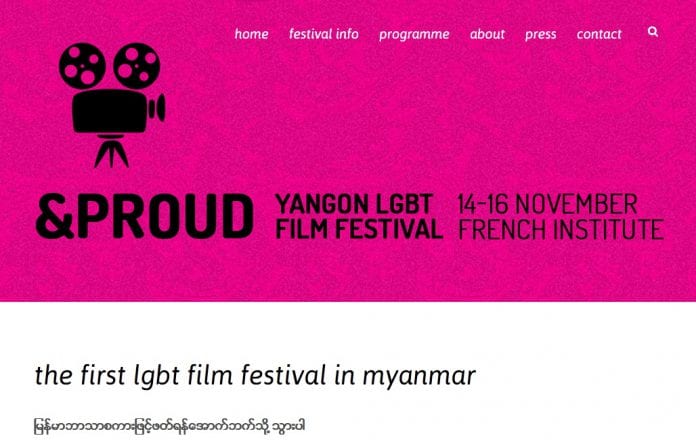 The &PROUD festival will screen films on November 14, 15 and 16, with the majority of the festival taking place at the French Institute, the organisers said.

All the movie screenings will be free, while side events include debates and discussions, parties and an exhibition.

With a focus on Southeast Asian films, the festival will celebrate the wide range and diversity of the lives of LGBTs in the region, &PROUD said in a statement.

“We hope the festival will make the LGBT community in Myanmar more visible, and to create awareness about LGBT lives and equal rights,” the statement said.

The films will feature as much of transgender communities, as they will of lesbian, gay and bisexual ones, and all films will be subtitled in Burmese and English.

Besides the film programme, there will be a number of social events and discussions, the organisers said.

In the run-up to the festival, 10 young LGBTs from Myanmar are taking filmmaking training, and together they will produce a total of three short films that will be showed at the festival. In addition, the festival will programme a number of other home grown Myanmar films.ax

Facebook
Twitter
Pinterest
WhatsApp
Previous articleGEW Aims to Give a Leg Up to Myanmar Entrepreneurs
Next articleIMF Report Warns on Foreign Bank Entry, Positive on Outlook