Public Transport Upgrade on the Cards After Bridge Constructions 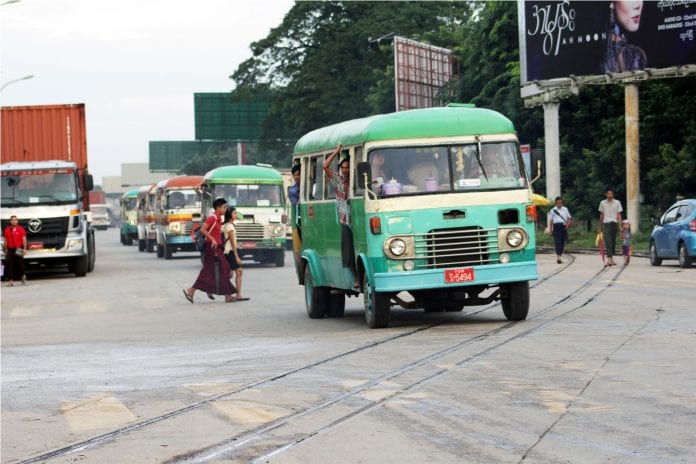 The long-awaited modernisation of the public transport system will take shape after two bridges in Yangon are completed, a government official said.

The authorities will first finish constructing the Bayintnaung bridge across the Hlaing river on the west side of Yangon and the Myaynigone overpass in Sanchaung township, regional minister for transportation U Aung Khin said.

The upgrade of Yangon’s public transportation system will commence in March 2015, according to the regional government.

However, these plans are still subject to change by the regional government, and specific directives are expected to be issued soon, said an official from the Regional Supervisory Committee for Motor Vehicles (MaHtaTha).

“The BRT (Bus Rapid Transit) system will be implemented soon in line with the president’s guidelines and the approval granted by the investment commission. Despite obstacles, relevant departments are working together on improving the [transportation] system,” said U Hla Aung, chairperson of MaHtaTha.

Focusing not only on the bus networks, the plan will also cover the train lines by improving stations and tracks, he said.

U Hla Aung said he has also received suggestions that train lines should be promoted to better attract commuters from experts at the Japan International Cooperation Agency (JICA), which is providing support to the government to develop a vision for the greater Yangon.

Negotiations with foreign companies on reforming public transport are also underway, he added.

A total of 2.2 million residents in Yangon take bus lines daily while only about 100,000 people ride trains, according to MaHtaTha figures.

Myanmar’s first BRT system will be launched on a test run along Waizayandar road this month, U Aung Khin said. Local firm OMNI Focus Co was contracted to operate the system in early August and has been carrying out assessments on routes and required spaces, he said.

The route is one of four routes for BRT system planned as part of the greater Yangon project, assessments for which have been done since 2013.

Ministry of Transportation and the Ministry of Rails are working together with JICA to develop the system that will establish the main components – road reconfigurations, Intelligent Transportation System (ITS) and separate bus stops.