Qatar Airways Wins ‘Airline of The Year’ Award at 2015 Skytrax 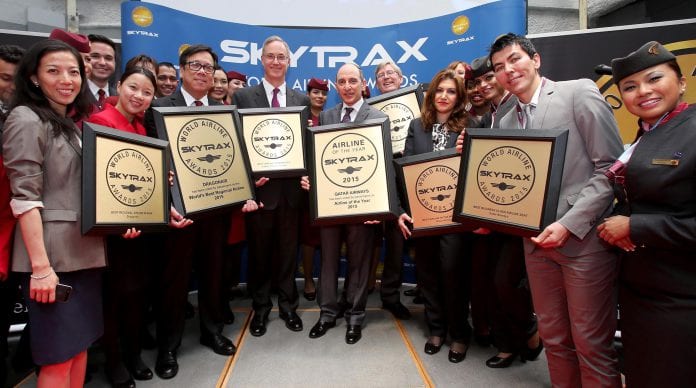 Qatar Airways has been awarded with three aviation accolades at the annual Skytrax World Airline Awards this year, winning ‘Airline of the Year’ for a third time.

In addition, the airline also collected two other awards: Best Business Class Airline Seat and Best Airline in the Middle East – which Qatar Airways has won for the eighth time.

The award comes at a time when the airline has experienced remarkable growth, given the enhancements to its fleet in the last 10 months, with the entry into service of the Airbus A380 and the Airbus A350.

The Skytrax World Airline Awards, held this year at the Musée de l’Air et de l’ Espace, Paris Air Show, is known as the “Passengers Choice Awards” as travellers from 160 countries participate in surveys to decide the winners.

Major recent enhancements have been introduced at Qatar Airways, including the opening of the world’s largest Business Class lounge, ‘Al Mourjan’ at Hamad International Airport in Doha; a complete revamp of the airline’s in-flight entertainment system, Oryx One, and newly introduced amenity kits across all classes of travel; new on-board menus, check-in enhancements, and many others.

Qatar Airways’ fleet was on display at the Paris Air Show 2015, with the airline is showcasing its latest generation aircraft – the Airbus A380, A350 XWB, A320 and A319 and a Boeing 787 Dreamliner.