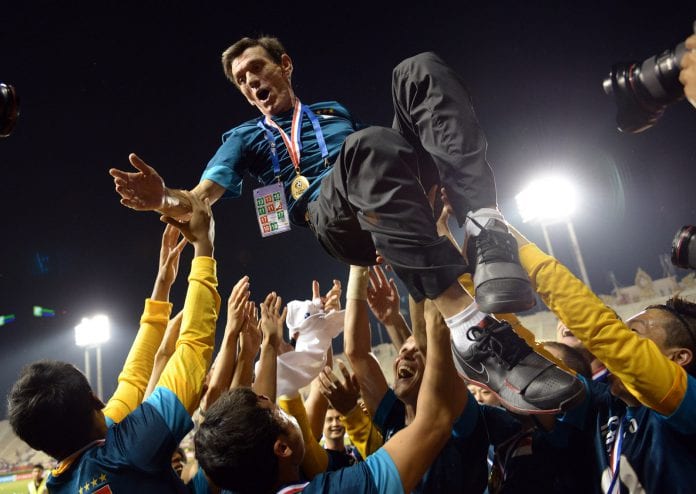 Myanmar are set to pip Southeast Asian rivals, the Philippines, in the race to sign Radojko ‘Raddy’ Avramovic as head coach, recent media reports have revealed.

According to the Singaporean version of Goal.com, U Zaw Zaw, president of the Myanmar Football Federation(MFF) revealed that Myanmar, who were knocked out of the Southeast Asian Games group stages following a narrow defeat to Indonesia, are in advanced discussions with the former Serbian international.

“We are in detailed consideration over the contract. 75 percent [of discussions] are already completed, but we will release an official announcement after the contract signing,” the website cited U Zaw Zaw as saying.

Former coach, Korean Park Sung Hwa, was fired from the role after the team was eliminated in the group stages of the recent Southeast Asian Games. Following impressive victories against Timor Leste and Cambodia and a hard-fought draw against Thailand, Myanmar only needed a draw against Indonesia in the final group match to qualify for the competition’s Semi Finals.

Myanmar lost the match 1-0, knocking them out of the competition, and it was revealed after the match that Park was unaware of the head-to-head rule which meant that Indonesia qualified ahead of Myanmar, despite the hosts having a better goal difference record than their rivals.

Avramovic made his name during a five-year stint in England, where he made over 150 appearances for Notts County.

He has previously managed the Kuwait and Singapore national teams, the latter of which he managed for 10 years, leading them to the ASEAN Football Championship on three occasions, most recently in 2012.

Myanmar football’s golden era came during the 1960s and early 1970s when the country won five consecutive Southeast Asian Games gold medals from 1965 to 1971, and qualified for the 1972 Olympic Games hosted in Munich.