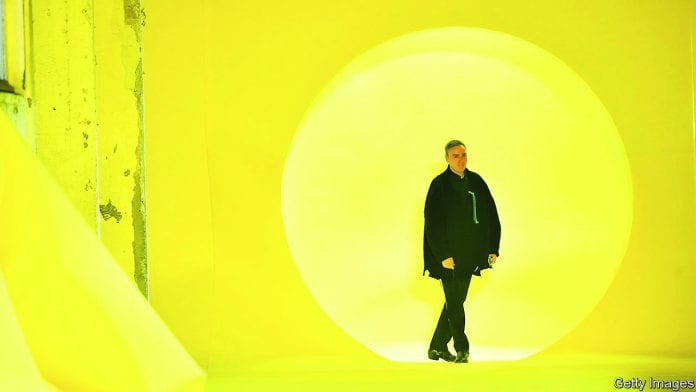 MILAN – In a move that could reshape the fashion world, Miuccia Prada and Patrizio Bertelli, the creative director and chief executive of the Prada Group, the thinking woman’s brand and one of the gravitational poles of the Italian industry, announced on February 23 that they were appointing Belgian designer Raf Simons as co-creative director of Prada.

Simons and Prada will have “equal responsibilities for creative input and decision-making,” the announcement said.

The disclosure came on the final day of Milan Fashion Week – and two days after what was Prada’s last solo ready-to-wear show – at a live news conference held in the brand’s headquarters.

Although limited-edition collaborations have become a trend in fashion, this takes the idea to a different level, especially in an industry where designers are not known for sharing the spotlight and sole aesthetic authorship is traditionally fetishized.

Simons, 52 and Prada said they had been in discussions for more than a year about the possibility of working together. Simons left his job as chief creative officer of Calvin Klein in December 2018,

Prada, 71, denied that the decision was made as preparation for her eventual retirement. Rather, both designers presented it as a reaction to the evolution in the fashion world toward a focus that prioritized commercial results over creativity, and as an attempt to right the balance.

The “fashion industry is moving more and more toward an industry that might end up excluding creatives,” Simons said during the news conference. “I see more and more the possibility of having a strong business without strong creation. That is something we do not agree with, Miuccia and myself, and I know for a fact many designers do not agree with. We think we should not forget in this business about creativity.”

Prada is well known for having joined the Italian Communist Party as a young woman in the 1960s (and protested in a Saint Laurent suit). In 1978 she took the helm of the niche leather-goods company started in 1913 by her grandfather and, along with Bertelli, her husband, built it into an empire. First, with a simple black backpack in nylon and a small branded triangle on the front, introduced in the mid-1980s, that acted as a riposte to the bling and bluster that defined the fashion of the decade. Then, by introducing womenswear in 1989, and in 1993, a second line, called Miu Miu after Prada’s nickname.

She brought ugly chic to fashion, married film noir styling to frumpiness with aplomb, and always questioned the place of fashion in the political and cultural spheres. Though she and Bertelli at one point had ambitions to build an Italian luxury conglomerate to rival LVMH and Kering – acquiring Helmut Lang, Jil Sander and footwear brands Church’s and Car Shoe as part of the plan – they ultimately sold the two fashion lines and scaled back, focusing on the core names.

However, it was when they owned Jil Sander (which they sold to a private equity group in 2006) that they first met Simons, and took a risk on hiring him for the women’s brand. (He then was known for the menswear line that still bears his name, and which he will continue to own and design.)

Simons remained at Jil Sander until 2012, moving on later that year to become artistic director of Christian Dior following John Galliano’s firing after a drug-and-alcohol-fueled anti-Semitic rant in 2011.

He is known for his fascination with youth culture and an ability to marry that with an appreciation of couture tradition, often through technically challenging design. While at Calvin Klein, he won the 2017 Designer of the Year awards for womenswear and menswear at the Council of Fashion Designers of America event – before either collection had even entered stores, almost overnight making the brand a force in New York fashion again.

However, Simons also has a recent history of short-lived stints at big brands: He left Dior after only three years, dissatisfied with the limits that its owner LVMH placed on his ability to shape the aesthetic message of the company beyond the women’s runway collection. And he had a very public falling-out with Calvin Klein management after two years over the way the ambitious direction of his designs – an attempt to redefine American sportswear with totems from Andy Warhol to the badlands of South Dakota – had disrupted sales. (Calvin Klein has since stopped holding runway shows and did not appoint a new design chief, a situation that may have helped prompt Simons’ veiled comments about brands placing business over art.)

Both Simons and Prada say their partnership will be the right fit. At the news conference, Bertelli characterized the pairing as “not just a professional relationship, but a human relationship. We share a similar identity.”

Simons said he and Prada had been in an extended “dialogue about fashion, culture, politics, content” over the years. They share a belief that fashion needs to be about more than mere prettiness, but should grapple with issues of self and society, as well as a love of contemporary art, reflected in their personal collections as well as the Prada Foundation. Indeed, Simons said it had been his first extended creative collaboration, with artist Sterling Ruby, that had convinced him that such a relationship could engender not conflict but rather a blossoming of ideas.

Robert Burke, founder of an eponymous luxury consultancy and the former fashion director of Bergdorf Goodman, said: “It is a strong strategic move positioning the house for the future. It will be well received by the Prada customer, and will also bring a new customer to the brand. It is a much more natural fit than the Calvin job. It could also start a trend, and perhaps an important one, since a number of brands need to plan for the future.”

Luca Solca, a luxury analyst at Bernstein, said, “All major turnarounds have been achieved by injecting new creative ideas into brands. I guess Prada would benefit from the same approach, though I wonder how this collaboration will play out.”