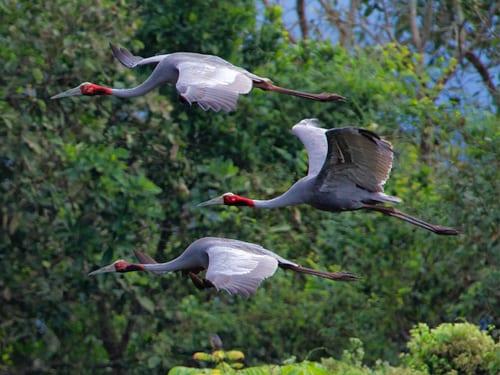 “First we just saw their charismatic red heads sticking out of the tall green grass, but through our telescopes we soon spotted the amazing number of nine individuals,” said Ngwe Lwin, who was counting wetland birds together with his team of FFI ornithologists, and Win Zaw Lun, a ranger of Indawgyi Wildlife Sanctuary.

This species, which at a height of up to 1.8 metres is the tallest of the flying birds, has been frequently recorded in Rakhine state and the Irrawaddy delta, but is very rare in northern Myanmar.

Previously only very small groups of 2-3 individuals have been spotted in Indawgyi, but never before has such a large group been seen.

Ngwe Lwin, Fauna & Flora International’s Terrestrial Conservation Programme Coordinator said, “Finding this large group of sarus crane in Indawgyi area has shown us that this species, which is classified as Vulnerable on the IUCN Red List of Threatened Species, is still safe in the Indawgyi area. We hope to see more in the future.”

Sarus cranes are large non-migratory birds found in parts of the Indian Subcontinent, Indochina and Australia.

Sarus cranes in Myanmar belong to the subspecies of the eastern sarus crane Grus antigone sharpii that formerly occurred throughout Indochina.

Over the last fifty years it has been decimated throughout this range, but still occurs in smaller numbers in Myanmar, Vietnam, and Cambodia.

Eastern sarus cranes in Yunnan Province (China) and Laos are either rare or recently extirpated, while the eastern sarus in Thailand was thought extirpated in the mid-20th Century.

FFI is now planning a specific sarus crane survey, to gain greater knowledge and help determine the threats to the species.

Once survey results have been reviewed, FFI will follow up with conservation actions in collaboration with the wildlife sanctuary and local communities to ensure the survival of this charismatic species in wetlands of Indawgyi Lake, the group said.