Recharge Your Phone in 30 Seconds? Israeli Firm Says It Can 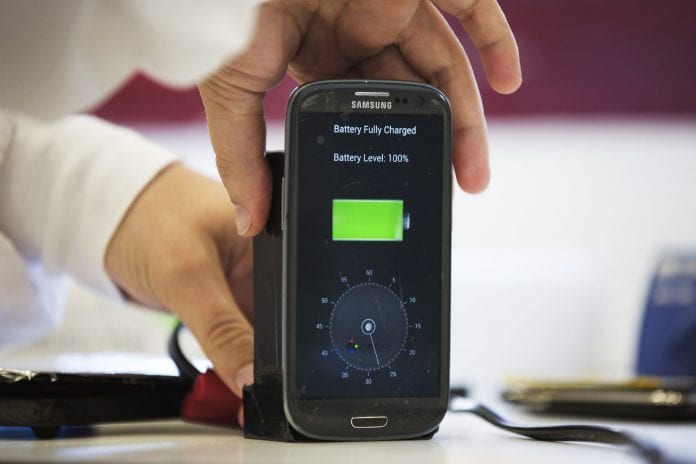 An Israeli company says it has developed technology that can charge a mobile phone in a few seconds and an electric car in minutes, advances that could transform two of the world’s most dynamic consumer industries.

Using nano-technology to synthesise artificial molecules, Tel Aviv-based StoreDot says it has developed a battery that can store a much higher charge more quickly, in effect acting like a super-dense sponge to soak up power and retain it.

While the prototype is currently far too bulky for a mobile phone, the company believes it will be ready by 2016 to market a slim battery that can absorb and deliver a day’s power for a smartphone in just 30 seconds.

“These are new materials, they have never been developed before,” said Doron Myersdorf, the founder and chief executive of StoreDot, whose investors include Russian billionaire and Chelsea soccer club owner Roman Abramovich.

The innovation is based around the creation of “nanodots”, which StoreDot describes as bio-organic peptide molecules. Nanodots alter the way a battery behaves to allow the rapid absorption and, critically, the retention of power.

The company has raised $48 million from two rounds of funding, including backing from a leading mobile phone maker. Myersdorf declined to name the company, but said it was Asian.

With the number of smartphone users forecast to reach 1.75 billion this year, StoreDot sees a big market, and some experts think that – with more work – it could be on to a winner.

“We live in a power hungry world … people are constantly chasing a power outlet. StoreDot has the potential to solve this real big problem,” said Zack Weisfeld, who has worked with and evaluated ventures in the mobile phone sector globally.

“They still have some way to go, to deal with size of battery and power cycle rounds, but if solvable, it’s a very big breakthrough,” he told Reuters. A power cycle round refers to the number of times a battery can be re-charged in its lifetime.

Myersdorf said a fast-charge phone would cost $100-$150 more than current models and would ultimately be able to handle 1,500 recharge/discharge cycles, giving it about three years of life.

He hopes to use the same technology to create a car battery that recharges in two or three minutes, rather than current models which commonly need to be charged overnight. (Reuters)