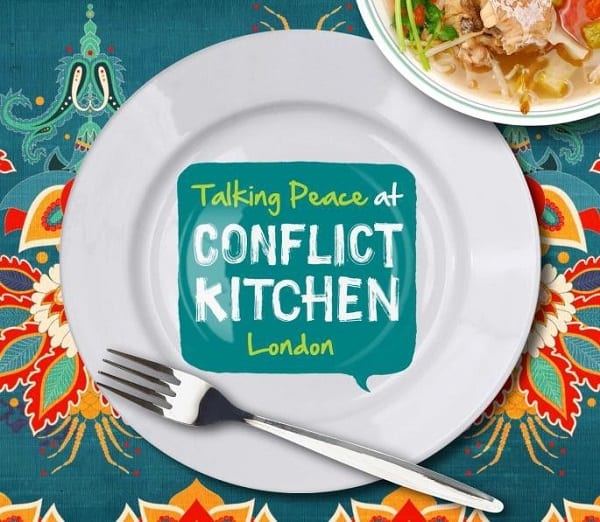 It doesn’t want to force a message down your throat, but it hopes that by the time you leave you might have digested more than just dinner. Conflict Kitchen London wants to be a restaurant with a conscience.

The pop-up eatery, launched ahead of the International Day of Peace on September 21, is serving traditional food from Myanmar, Jordan and Peru to encourage discussions about the prospect of peace in those countries.

More than 100 people attended the first week of the three-week residency at Monikers, a space in East London.

A mixed crowd of locals, foodies and nationals of Burma, the country now called Myanmar, got a chance to meet new people and try dishes including hincho, a spicy soup, and a chicken-and-coconut curry served with egg noodles.

As the £35 three-course meal was being prepared, guests broke the ice with strangers, using conversation cue cards about everything from Myanmar’s largest exports to the number of years its opposition leader, Aung San Suu Kyi, spent under house arrest.

They could also order themed cocktails, with a Negroni masquerading as a “Rangooni”, after the original name of Myanmar’s commercial capital Yangon.

Debbie Riehl, an up-and-coming Myanmar-born chef and artist who conceived and prepared the dishes, said the restaurant catered to a number of needs.

“To talk about global issues over a meal? I just had to get on board with this,” she said. “It’s non-confrontational, people are having conversations about things, and exchanging ideas, thoughts, views, everything.”

The agendas for debate are far from rigid. On one table conversation soon swayed towards the topics of the Scottish referendum and the current state of music education in the UK.

On another, a pair of Burmese friends discussed how they had never attended such an event before and could usually share Burmese food only in one of the few Buddhist monasteries in the capital.

Debbie added: “A lot of Burmese people have come as well. They’re thrilled that there is a Burmese pop-up but also to be associated with something like this because they’re obviously more aware of the conflict in Burma.”

The creative decor is designed to bring diners up to speed with the issues. A large rolling chalkboard outlines the history of Myanmar as a creative infographic. Communal tables have placemats with world maps.

“Peace is a marathon”

A bell rings before each course is served, followed by a “fact” shared by Phil Champain, director of Emerging Programmes at International Alert, the charity behind the concept.

He outlined the history of Burma’s independence from Britain in 1948, decades of authoritarian military rule and the reforms in 2010 which could lead to the country’s transition to a full democratic government.

“But peace is a marathon, not a sprint,” he said.

He added that Conflict Kitchen London was inspired – loosely – by Cocina del Conflicto (Conflict Kitchen), a project in Pittsburgh, Pennsylvania which only serves food from “countries with which the United States is in conflict”.

The non-profit pop-up is part of International Alert’s current Talking Peace festival, which offers a series of peace-related events across London.

“It’s very much looking at this kind of food as a way of bringing people together to ultimately resolve differences and reconcile and also deepen understanding,” Champain said.

A few days later, diners were invited to think about Jordan, facing pressure from an influx of refugees from Syria, Iraq and the Palestinian territories.

The final week will put the spotlight on Peru, where there is conflict between indigenous people and companies over land rights and natural resources.

“I think it’s unusual to have food mixed with politics but those are two things I enjoy,” said Nina Harris, an 18-year-old student from London who came to the Jordan evening with her sister.