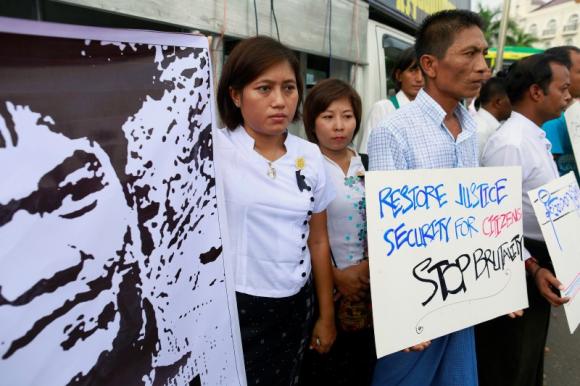 Human rights groups on Monday demanded Myanmar investigate the killing of a journalist who was in military custody after reporting on clashes between government and ethnic rebel forces.

Freelance journalist Par Gyi was arrested on Sept. 30 after completing a photo assignment documenting clashes between the military and the rebel Democratic Karen Benevolent Army and was killed on Oct. 4, the Myanmar-based Assistance Association for Political Prisoners (AAPP) said.

The AAPP disputed a statement released by the military, which said Par Gyi was shot when he tried to steal a gun from a soldier and escape after being detained because he was a member of an ethnic Karen rebel organization.

"So far we have seen no basis for this allegation, with his body not even being returned to his family," the AAPP said in a statement.

The military said on Thursday that Par Gyi was an information officer for an obscure insurgent group called the Klohtoobaw Karen Organization, and was arrested after clashes in eastern Mon state near the frontier with Thailand.

Various rebel groups have battled Myanmar's central government since shortly after independence from Britain in 1948. While the government has struck ceasefires with almost all factions, clashes occasionally flare up, undermining the government's goal of signing a national ceasefire agreement before next year's elections.

After 49 years of military rule, a semi-civilian government took power in 2011 Myanmar and ushered in sweeping political and economic reforms. But rights groups say the government has been cracking down on journalists over the past year, and they accuse the military of continuing to commit abuses.

"If this government wishes to see a free, democratic Burma then they must be strong in this issue and end these systematic and inhumane practices," the AAPP said, using the country's former name.

About 300 people demonstrated in Yangon, Myanmar's largest city, on Sunday afternoon, calling on the government to investigate.

"Civilian authorities must investigate the military's accounting of his death, which has the initial hallmarks of a cover-up," said Shawn Crispin, CPJ's Southeast Asia representative.

Government spokesman and information minister Ye Htut could not be reached for comment. (Reuters)