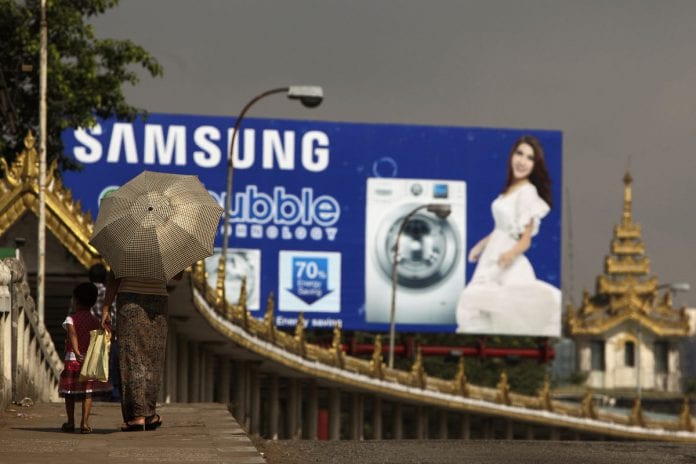 The package is being offered as Samsung launches its Galaxy Note 4 in Myanmar. Yangon and Mandalay saw the launch last week.

MPT, which until recently had a monopoly on Myanmar’s telecommunications sector, went on to rebrand itself and started selling SIM cards for only K1,500 in September. In 2004, MPT sold one SIM card for $3,000, and later came down to $250 in 2011 and later to $90 earlier this year.

The two new international entrants in Myanmar’s telecoms scene – Ooredoo and Telenor – started providing their SIM cards at K1,500, which forced MPT to take down its prohibitive SIM card prices.

MPT also recently concluded a partnership with leading Japanese companies, KDDI and Sumitomo, to upgrade its services and technology in a desperate bid to keep up with the foreign players.

Samsung said consumers who purchase a Samsung Galaxy Note 4 will receive a free MPT SIM card, which it calls ‘internet ready,’ meaning customers won’t have to top up K10,000 for an internet registration.

This offer will be extended to all Samsung brand shops. Customers will need to bring their ID card to register for the MPT SIM Card.

Consumers will receive a main balance of K300 and additional K10,000 bonus balance that will come together with the MPT SIM, Samsung said. Main credit and bonus will be valid for 120 days starting from the SIM card activation date.

“Samsung Myanmar is delighted to be able to have this collaboration with MPT,” said Nam Sik Ahn, managing director of Samsung Electronics Myanmar.

“The new Galaxy Note 4 introduces the most refined Note experience to-date by combining all the latest technology that users expect from the Galaxy series. Together with MPT’s offering, we believe Myanmar consumers will be able to benefit even further.”