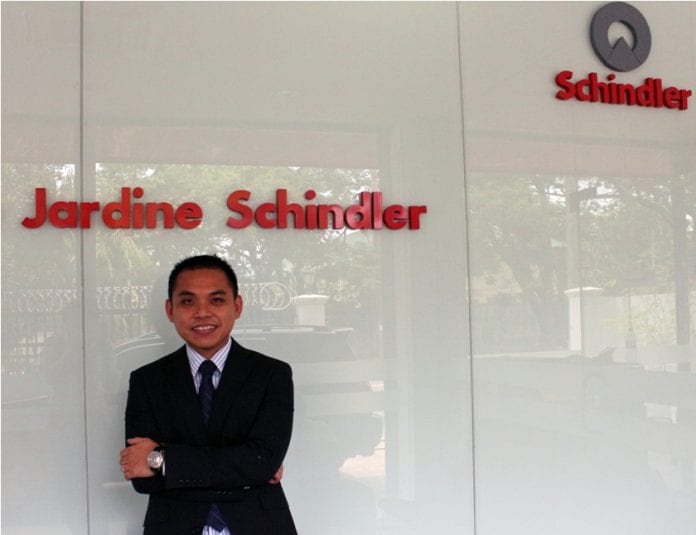 Swiss lift and escalator maker Schindler is focusing on training and developing its local human resources in Myanmar in a bid to ensure its long term growth in the Southeast Asian country where recent economic opening has handed explosive growth opportunities to foreign firms.

The region’s top lift and escalator manufacturer began in Myanmar in 1999 as the only fully foreign-invested lift company and has operated a long-standing joint venture with British conglomerate Jardine Matheson for numerous territories in the Asia Pacific region.

Jardine Matheson is a diversified business group that has operated in Asia since 1832. In Myanmar, their other businesses are Jardine Cycle and Carriage, which distributes Mercedes Benz, Mazda and Fuso trucks, Acleda Microfinance and Jardine Engineering Company.

“Most lift companies operate in Myanmar through agents or distributorship to reduce risks or exposure. For us, webelieve in the potential of this country. When you are 100 percent invested, then you will make the necessary human capital investment for the long term success of the company,” Willis Phua, general manager of Myanmar Jardine Schindler Ltd, told Myanmar Business Today.

“Since 1999,we have been present here during good times and bad, reflecting both our commitment to the country and our belief in its future.”

Prior to the reforms and opening up of the country in 2011, Schindler did not register significant profits in its books. Its primary motivation for continuing to operate then was to support its customers in maintaining the lifts they had bought from Schindler and to continue to provide jobs for its local employees.

Since the quasi-civilian government took power in Myanmar and opened the country for businessin 2011,demand for infrastructure development shot up, new apartments, malls, housing sprouted all over the commercial capital Yangon – so up went the demand for lifts and escalators.

In October 2013, Schindler relocated to a new office at Parami road, with a total of more than 100 employees.

“Sales went up because of the opening up of the country. We increased our sales two to three folds last year. We had the majority of the market share as the property and construction sector increased rapidly,” said Willis, who came to Myanmar from Schindler Singapore last year.

Willis said Schindler built its reputation in Myanmar on being a premium supplier with good customer service. He said his main challenge now is to fulfill the burgeoning orders timely and continue to maintain the quality and standards that its brand represents.

“We know we have to build up our competencies very, very fast – that means investment in a new office, in people and in training. The objective is to recruit the right people, invest heavily in upgrading our skills so that we can upkeep premium levels of project fulfilment and maintenance standards. This will differentiate us from the rest of the competition.”

Willis said Schindler has a strong local network, so the majority of its customers are local. “If they [Burmese] know thatyou are good, then your name will spread through word of mouth. That’s how we built our business over the last 15 years to a market leader position.”

He said being a 100-percent foreign company helped Schindler do that. “Being fully owned and not operating through agents or distributors, we are fully accountable to our customers. That puts a responsibility on every employee to make sure that our actions live up to the brand.”

Willis said in the last 12 months that he has been in the country, more than 20 Schindler Myanmar personnel have gone for different types of overseas training. The trainings range from product, sales, marketing and logistics to technical, installation and maintenance trainings.

He said that as Myanmar’s construction industry moves towards taller buildings, different products will need to be introduced to cater for such needs. The company also sends its sales people for lift traffic simulation trainings, which allow Schindler to help building owners in designing the specification of the lift system in a building during planning stage.

“We are very mindful about developing long term local competencies,” he said emphasising the importance of building a skilled local workforce.

“When you start a company you may choose to bring in expatriates to obtain therequiredexpertiseand to transfer their skills to the local workforce. However, we focus on the skills transfer very early on.

“We commit to train and develop our local workforce from the early stage of the establishment of Schindler Myanmar. This is to ensure the future of this company lies in the hands of driven and committed Burmese staff,” he said.

Willis said most of Schindler’s key appointment holders are Burmese and many of them have had work experience in Singapore prior to returning to their country. The lift company also has an apprenticeship scheme and the applications are piling up, he said.

On top of its in-house apprenticeship program, Schindler also partners with Yangon-based Swiss-run Center for Vocational Training (CVT) for some of its training programs.

Schindler also plays its part in corporate social responsibility, having contributed to the rebuilding of the school in Aye Yar Gyi village in the delta region which was badly affected by Cyclone Nargis in 2008. Willis, who visited the school earlier this year, said, “It is very heartening, and humbling, to see the teachers doing everything they can to give the students a better education despite their circumstances.”

Willis said Schindler will continue to achieve significant growth in the coming years if the government continues its reforms.

However, competition is growing fiercer – with many regional and international brands entering into the market.

Willis said building competencies to deliver commitments to customers would be the key to survive in this market.

“At the end of the day, what differentiates you from the rest of the competition is the standard of customer service in project fulfilment and maintenance. Our guiding vision is being the leader in delivering above par customer service.”