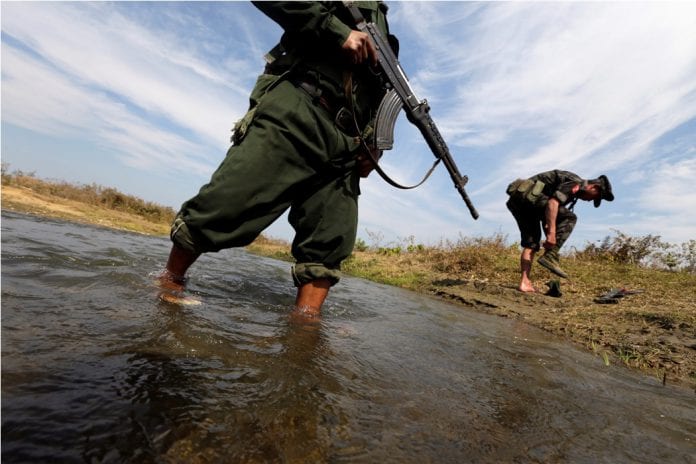 The establishment of the Bangladesh-China-India-Myanmar (BCIM) economic corridor, expected to be a new highlight of Asian regional cooperation, has been put on a fast track.

The four nations involved formally set up a working mechanism to promote cooperation at a meeting in December, coming up with a timetable on promoting the long discussed plan.

Taking Dhaka, Kunming, Kolkata, and Mandalay as four pivots, the designed economic corridor covers parts of Bangladesh, China’s Yunnan Province, Myanmar and India’s eastern and northeastern regions. This year will be key to realising the blueprint.

Nonetheless, as the BCIM economic corridor spans mostly border areas characterised by poverty, ethnic division and collision, and rampant transnational crimes, both security and development must be ensured during the construction of railway and road networks, logistics centres, industrial parks and scenic areas along the corridor.

Thorny security challenges have to be resolved out of the need for a stable environment in establishing the corridor. Meanwhile, rapid economic development will also help eradicate ethnic division and potential security hazards.

The four nations are confronted with various prominent security problems among their adjacent areas. For instance, drug smuggling, human trafficking, gambling and kidnapping are rampant, making it harder to manage transnational trade and interaction along the almost 2,000-kilometer-long borderline between China and Myanmar.

The situation is worsened by the conflicts between armed ethnic forces and government army in northern Myanmar. Transnational crime gangs in the Golden Triangle also pose severe dangers. The Mekong River massacre in 2011 plotted by an armed drug cartel led by Naw Kham even suspended the traffic along the golden waterway for a while.

Border areas between China and India have seen spats at times such as the “tent confrontation” in April 2013. And the seven states of northeastern India have been long harassed by ethnic separatists. Some armed rebels fled to Myanmar, and still survive despite joint crackdown efforts.

The Bangladesh-Myanmar border areas are not much better, flooded with a swarm of refugees caused by ethnic conflicts in Myanmar.

The security issue is one of the main obstacles in constructing the BCIM economic corridor. This undermines the indispensable security and political mutual trust among the four nations.

Continuous cross-border disputes risk halting infrastructure constructions, such as the building of transportation networks, interrupting border trade and scaring away potential investors, which could only weaken the momentum to build the corridor.

All the four countries are at a critical moment of boosting economy, eliminating poverty and improving livelihood, while lasting poverty is the root cause for the high crime rate in those volatile frontier regions.

It’s urgent for the four countries to further collaborate with each other especially under the circumstances of a long-term sluggish global economy. The BCIM economic corridor connecting.

There are already some bilateral stability-maintaining mechanisms among the four countries. But this is far from enough. A quadrilateral mechanism should be set up to keep the stability and development of the border areas, enhancing mutual trust and information sharing.

The four should carry out joint transnational crackdown on separatism, terrorism, cross-border crimes, and other security problems that dampen the construction of the corridor.

Only through this can the BCIM economic corridor truly promote development and friendly interaction among the four nations and benefit the entire region. GT

The author is a Myanmar affairs commentator based in Beijing.