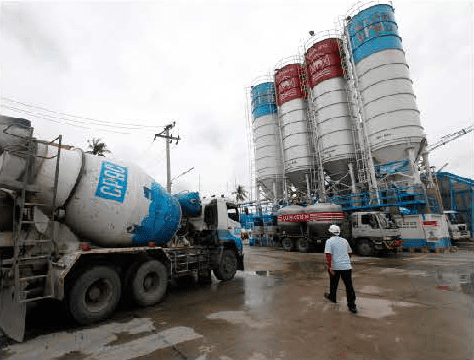 The facility would be Siam Cement’s first in Myanmar and will have annual capacity of 1.8 million tonnes, the company said in a statement. The plant is expected to start production by mid-2016.

The plant will also include a 40 megawatt (MW) power plant and a 9MW waste-heat gen­erator system with latest clean-technology for internal power consumption, supporting port facilities, and other infrastruc­tures for future expansion, SCG said.

Kan Trakulhoon, president and chief executive of SCG, said the board of directors approved the investment to construct the plant in Myanmar under the recently-opened country’s Foreign Investment Law.

“The cement plant will be strategically located in Mawla­myine, where there is a long-term supply of limestone com­plemented by access by boat to Yangon, Myanmar’s primary commercial hub,” he said.

The Myanmar cement market was estimated at approximately 4 million tonnes in fiscal year 2012, and is forecast to grow annually at 10 percent over the next five years.

Kan said this project is the company’s major investment to support growth of cement-building materials business in Myanmar and ASEAN next to recent announcement to construct cement plants in Indonesia, and Cambodia, and is in accordance with the com­pany’s strategy to feed growing demand from a region that is home to some of the world’s fastest growing economies and frontier markets.

Bualuang Securities noted in its research that the cement, petrochemicals and building-material businesses would strengthen SCG’s growth in the next few years. The growth of its cement business will be driven by rising sales revenue backed by new investment and the in­creasing demand in Myanmar, Cambodia and Indonesia.

Bualuang said the two new cement plants in Indonesia and Cambodia would be able to operate commercially in 2015.