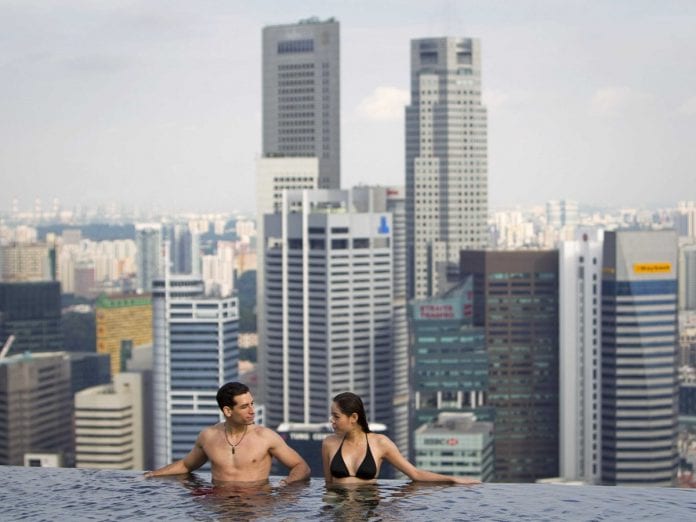 Official plans for a significant supply of new homes over the next decade make the price outlook even dimmer. Yet land prices have rallied, pushed up by foreign developers drawn by political and economic stability.

“The Singapore market is now very tough,” said Teo Ho Beng, Hiap Hoe’s chief executive officer. “Getting new land is a challenge, because there is so much competition.”

Hiap Hoe made its first foray abroad by buying three properties in Australia in the past four months. In coming years, most of its revenue will likely come from outside the island-state, Teo said.

SingHaiyi Group Ltd, which earns 98 percent of revenue in Singapore, bought two properties in the United States this year and appointed Neil Bush, brother of former US President George W Bush, as non-executive chairman. The company shifted focus to Singapore two years ago in response to property-price cooling measures in its native Hong Kong.

Seventy-two developers participated in this year’s nine private residential-use land auctions, including at least eight from abroad. That made 2013 the most competitive year since at least 2008 in terms of average number of bidders per auction, showed data from the Urban Redevelopment Authority of Singapore.

Local developers outbid foreign rivals and their partners in five of the nine auctions, their lowest win ratio in at least five years.

Kingsford Development Pte Ltd, from China, bid at four of the auctions and won two. In one of the auctions it offered as much as 16 percent above the bid of the closest competitor, despite soft home sales at its maiden Singapore project on a site purchased last year.

“The profit margins here aren’t as good as in China, but the market is more stable,” Yao said.

The other two foreign winners were subsidiaries of Metallurgical Corporation of China Ltd and Malaysia’s Sunway Bhd.

Land prices have risen on an island smaller than New York City. Singapore has grown over 20 percent in the past 50 years and the government projects an extra 8 percent growth by 2030 to accommodate economic activity.

Every five years, the URA issues a land-use plan for the next 10 to 15 years. A draft in November showed land reserved for up to half a million mostly public homes, enough to house 2 million people. Public homes can be sold in the open market after varying years of occupancy.