Home Entertainment Smoke on the Water and Other Sydney Hobart Challenges 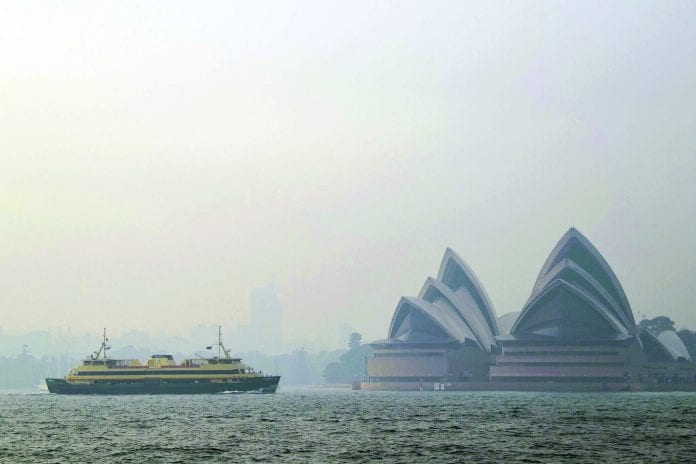 Hundreds of sailors were about to celebrate the 75th anniversary of the Rolex Sydney Hobart Yacht Race. Then one uninvited guest showed up: Smoke from nearby bushfires.
An eerie layer of haze that cut visibility in Sydney Harbor to 0.1 nautical miles forced the cancellation of the Big Boat Challenge, a practice race, and left organizers fretting about what to do about the main race if the smoke persisted.
“We’ve had this smoke for weeks,” Paul Billingham, commodore of the Cruising Yacht Club of Australia, host of the race, said December 13. “We just don’t know what the wind is going to do. We’ve never had to plan for this before.
“With a bit of luck, we’ll get some southwesterly winds and we’ll be good to go.”
He said that while the race would not likely be canceled because of the smoke, it could be delayed by an hour or maybe a day. But he said that it was important to put the event in perspective.
“While this race is important, there’s people losing their houses, and firefighters are putting themselves in danger,” Billingham said. “It would be great if the fires are all gone before the race.”
But unfortunately, he said, the forecast called for more hot and windy conditions, “so it might be tougher than that.”
The smoke is just the latest in a long line of challenges that have helped define the race as one of the toughest ocean sailing competitions in the world: A 1998 tragedy killed six sailors, sank five boats and forced the rescue of 55 sailors after they battled 65-knot winds.
Organizers said the race was created in 1945 after three sailors anchored in Sydney decided to cruise down to Hobart on their boats. As word spread, more sailors showed interest. John Illingworth, an English ocean-racing yachtsman, suggested they make a race of it.
On December 26, Boxing Day, nine boats started the race. One day later a storm hit, with 50-knot winds, driving rain and high seas. Several boats sought shelter.
The 628-nautical mile course starts in Sydney Harbor, and it is always a show. Thousands of people cram the shorelines as racers dodge hundreds of spectator boats and television helicopters buzz above the fleet as it sails into the Tasman Sea.
Boats sail along New South Wales past beaches, coastal towns and fishing villages, following a course between the coastline and 40 miles offshore.
Many of the boats are within sight of one another as they follow their competitors’ progress with onboard computers and Yacht Tracker, the official race website, and monitor the twice-daily radio positions of the boats.
Over the years, race times have obviously varied. The slowest finish was recorded by Peter Luke, a founder of the race, in 1945. He made the run on his classic yacht Wayfarer in 11 days, 6 hours, 20 minutes.
The fastest honors belong to Jim Cooney’s LDV Comanche, a 100 super maxi, which did the race in 1 day, 9 hours, 15 minutes, 24 seconds.
Any time of night or day, when the first boats near arrival, spectators fill Sullivans Cove to cheer the yachts before they dock in Kings Pier Marina.
This year is the fourth-largest fleet with 170 vessels taking part, making it the second-largest since the race’s 50th anniversary in 1994 when 371 boats participated. Boat lengths have ranged from 27 to 100 feet.
Among this year’s fleet vying for the Tattersall Cup are five super maxis, including Peter Harburg’s Black Jack of Queensland; Cooney and Samantha Grant’s record-holder Comanche of New South Wales; Christian Beck’s InfoTrack of New South Wales; the Oatley family’s Wild Oats XI of New South Wales; and Seng Huang Lee’s SHK Scallywag 100 of Hong Kong.
This year England, Ireland, France, China, Hungary, Poland, Hong Kong and the United States are represented. The largest number comes from Australia, with New South Wales leading with more than 90 boats.
There are 10 past overall winners, including last year’s victor, Philip Turner’s Alive, Matt Allen’s Ichi Ban and Bob Steel’s Quest. Love & War, a classic yacht owned by Simon Kurts, returns as one of only two three-time winners.
“We’re very excited about returning for the 2019 Rolex Sydney Hobart and defending our Tattersall Cup title,” Duncan Hine, skipper of Alive, said in a statement.
“We could not imagine missing the race,” he said. “The opportunity to compete in both the 50th Transpac and the 75th Sydney Hobart in one year is almost too good to be true. After six days of heavy downwind sailing in the Transpac, the Sydney Hobart may seem like a sprint, but in many ways it is technically much more challenging. It is certainly going to be a memorable one.”
Thirty classic yachts will also race in this year’s edition, including Bill Barry-Cotter’s Katwinchar, a wooden boat built in 1904 and the oldest boat to ever compete in the race. Katwinchar will be joined by other classics including Fidelis; Nigel Stokes’ Knud Reimers 61 design, which won in 1966; and the Kialoa II, a “Speakman & Stephens” Stephens yawl that won in 1971.
The classic boats are competitive, but modern super maxi yachts like Cooney’s Comanche are favored to win.
“Every Rolex Sydney Hobart Yacht Race is a special event – it’s certainly one of the most famous races in the world,” Cooney said in a statement. “To be a part of the 75th is particularly exciting, especially alongside boats like Bill’s 32-footer here – it just shows you the diversity of the fleet, the interest in the race and the spirit of the people who are campaigning. It makes the whole thing much more of a personal event than just a yacht race.”