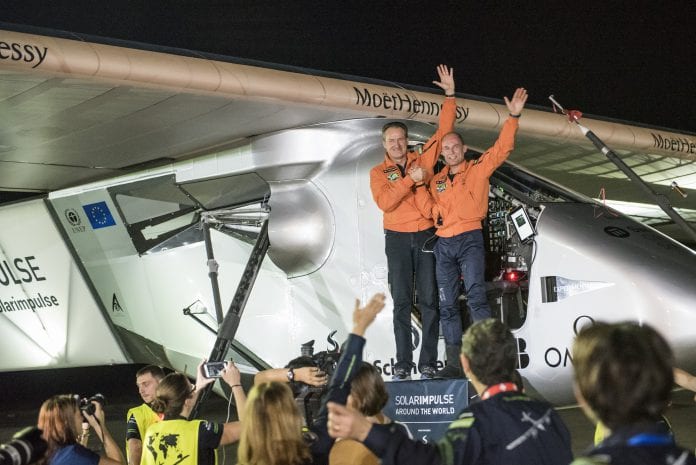 Swiss pilot Bertrand Piccard safely landed at the Mandalay International Airport with Solar Impulse 2 as it continues its journey around the world.

The solar aircraft departed Varanasi and arrived at this fourth stop on the global route. André Borschberg, co-founder and CEO of Solar Impulse, was at the controls for the previous flight that crossed India. Flying from Varanasi, it took the pilot 13 hours and 29 minutes to arrive in Myanmar.

Solar Impulse’s attempt around the world with the first airplane on solar energy is intended to inspire people and governments worldwide to make a broader use of clean technologies. It will stop at several key cities around the globe; moving on to Chongqing, and Nanjing in China before crossing the Pacific Ocean and the United States.

Myanmar has a complicated relationship with renewable energy. While less than one third of the country is connected to the electrical grid currently, this number is expected to surge in coming years with increased investment.

This, along with demand from industry, has led to a rise in demand, and some gas-powered plants having been built. Some of these projects are intended as short-term solutions before more sustainable power solutions can be implemented.

Alternative energy is viable in Myanmar, and Mandalay region in particular has the potential to produce a great deal of solar energy. Much of the country is currently using hydroelectric power, but there has also been widespread opposition to many of these projects.

Chaiyot  Piyawannarat,  country  managing  director  of  ABB  in  Thailand  and  Myanmar,  said, “Solar Impulse shows what’s possible when one is willing to venture beyond the boundaries. For example, by deploying renewable, energy efficient technologies and sustainable transport solutions, it is possible to decouple economic growth from energy consumption and environmental pollution.

“In Myanmar, by enhancing and fast-tracking the development of the power landscape, as well as of infrastructure and industry, technology can bring sustainable economic and social development for generations to come.”

On the plane’s 35,000-kilometer route, pilots Bertrand Piccard and Andre Borschberg have so far taken turns in the cockpit as the aircraft makes it way eastwards from Abu Dhabi, stopping in cities including Muscat, Oman; Ahmadabad and Varanasi in India before arriving in Mandalay.

Born into a Swiss dynasty of explorers and scientists, who conquered the heights and the depths of our planet, Bertrand Piccard seems predestined to perpetuate one of the greatest family adventures of the 20th century. Psychiatrist, aeronaut and lecturer, chairman of the Winds of Hope humanitarian foundation and goodwill ambassador for the United Nations, he is passionate about today’s great human challenges.

A pioneer of ultralight flying in the 1970s, an airplane and glider pilot, Bertrand Piccard achieved in 1999 the first ever non-stop round the world balloon flight, which was the longest flight in terms of duration and distance in the history of aviation.

André Borschberg, a graduate engineer in mechanics and thermodynamics from the Federal Institute of Technology in Lausanne, and holder of a Master’s in Management Science from the Sloan School, MIT Boston, has a solid background in creating and managing companies. Fascinated by aviation from his earliest youth, he learned to fly with the Swiss air force. Today he holds an assortment of professional airplane and helicopter pilot’s licenses and also does aerobatics in his spare time.

“Solar Impulse 2’s visit to Mandalay is a significant milestone and the time for Myanmar to be a part of the world history,” U Win Swe Tun, director general of the Department of Civil Aviation, said.