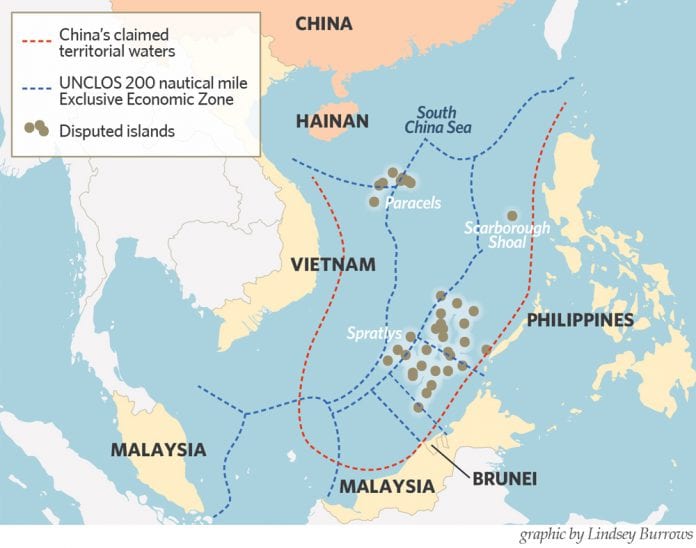 A surge of tensions in the South China Sea threatens to widen divisions between Southeast Asian nations at a summit this weekend, posing a severe test for host Myanmar as the newly democratic country seeks to manage the region's growing alarm over China.

The routine annual meeting of Southeast Asian leaders has been given a jolt of urgency by a series of collisions this week between Chinese and Vietnamese vessels after China stationed a giant oil rig near the disputed Paracel islands, off Vietnam's coast. Both sides have blamed the other, and dozens of coastguard and patrol vessels are in the area.

Tensions also spiked in another part of the oil- and gas-rich South China Sea, with Beijing demanding that U.S. ally the Philippines release a Chinese fishing boat and its crew seized on Tuesday off Half Moon Shoal in the Spratly Islands.

In particular, the unprecedented move by China to plant its drilling rig in Vietnam-claimed waters and guard it with dozens of ships appears likely to dominate discussions at the summit, raising questions over Southeast Asia's efforts to agree common maritime rules in ongoing talks with Beijing.

Myanmar, whose chairmanship of the 10-member Association of Southeast Asian Nations (ASEAN) this year marks a coming out on the international stage following the restoration of democracy in 2011, must walk a fine line between preserving ASEAN unity and not upsetting China, its biggest trade partner.

Differences within the group are already coming to the surface. Philippine diplomats told Reuters that some states were opposed to issuing a separate statement on the latest South China Sea or mentioning the tensions in the communique.

Ian Storey, a security analyst at the Institute for Southeast Asian Studies in Singapore, said the summit in Myanmar's capital Naypyitaw would be "another test of ASEAN unity."

"There will be countries like Vietnam, the Philippines, Singapore and Indonesia that will want to express serious concern at recent developments in the final communique," he said.

"Other members will be more wary, seeing the Paracels as a bilateral issue between Vietnam and China," he said.

Brunei, Cambodia, Laos, Malaysia and Thailand make up the other members of ASEAN, with the first three seen as especially keen to maintain good relations with China.

Singapore issued a statement on May 7 expressing concerns about recent developments and repeating previous calls for ASEAN and China to work for an early conclusion of the Code of Conduct in the South China Sea – a set of rules governing naval actions.

Myanmar will host two broader regional summits later this year, culminating in the East Asia Summit in November that is attended by the U.S. president as well as the Chinese head of state.

It will be keen to avoid a repeat of a disastrous ASEAN summit in 2012 when host Cambodia, a close Chinese ally, attempted to keep the South China Sea row off the agenda, resulting in ASEAN's failure to issue a joint statement for the first time in 45 years.

China says territorial disputes should be discussed on a bilateral basis, but agreed at last year's summits in Brunei to join talks with ASEAN on framing a Code of Conduct that would govern maritime conduct, with the aim of reducing the likelihood of clashes in the South China Sea.

The United States, which has forged closer security ties with Vietnam in recent years, has declared a national interest in freedom of navigation through the sea and this week called China's deployment of the oil rig "provocative and unhelpful." China in turn has blamed the United States for stoking tensions.

"China will keep talking about the Code of Conduct, as a short term strategy in damage control," says Maung Zarni, a Burmese political academic who is a visiting fellow at the London School of Economics.

"But it will likely opt out of anything binding or anything that will restrict its ability to do what it feels to be its historical right – to exploit the South China Sea commercially, build its bases anywhere it deems essential, or disrupt other claimants' economic and military activities in the area."

During decades of isolation, Myanmar, formerly known as Burma, relied on China as its closest diplomatic and military ally. But since Myanmar began pursuing dramatic reforms, its relationship with China has cooled.

"There really is a deep-seated loathing of aspects of Chinese commercial activity in Myanmar, and a belief the previous regime had made some bad bargains on energy and other big ticket deals."

An official with Vietnam’s Ministry of Foreign Affairs, who declined to be identified, said a repeat of the 2012 breakdown was unlikely as Myanmar had been weaning itself away from Chinese influence in recent years.

"It can be seen, although not very clear, that Myanmar has been trying to reduce the influence of China in its country, economically and politically," the official said.

"Myanmar may be more independent than Cambodia," he said. "But it is not independent enough for Naypyitaw to behave in any way that will displease, annoy, irritate or anger Beijing over the South China Sea issue." Reuters