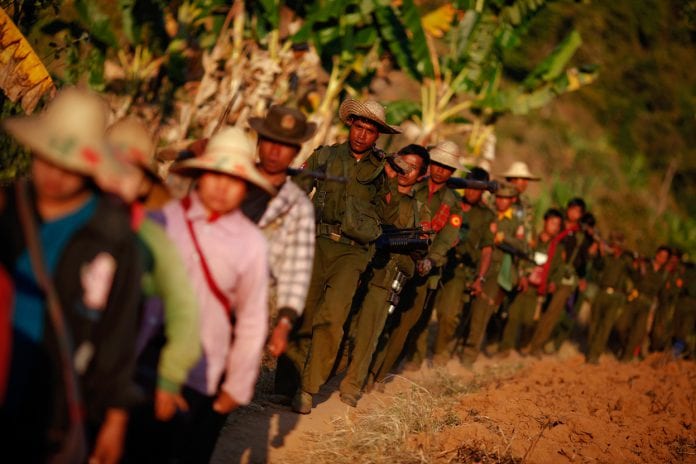 Led by a 13 percent increase in Myanmar opium cultivation to 57,800 hectares (from 51,000ha in 2012), opium poppy cultivation in Southeast Asia’s Golden Triangle of Myanmar, Laos and Thailand rose for the seventh consecutive year, according to a UN Office on Drugs and Crime (UNODC) report released last week.

The UNODC report, Southeast Asia Opium Survey 2013 – Lao PDR, Myanmar, said despite eradication efforts, higher yields combined with a rise in cultivation saw Myanmar opium production increase 26 percent in 2013 to an estimated 870 tonnes – the highest since assessments by UNODC and the Myanmar government began in 2002.

While production of opium poppy – a key ingredient in the production of heroin and various other illegal drugs – appears to have levelled off in Laos and remains low in Thailand, the survey shows increased production in Myanmar has caused the entire region’s production levels to more than double since 2005.

A 15-year plan developed by the Myanmar government in 1991 helped reduce production levels for most of the 1990s and early 2000s, but since 2006 production has steadily increased.

“These figures make clear that we need to step up efforts to address the root causes of cultivation and promote alternatives to poppy growing,” said Jeremy Douglas, UNODC regional representative, Southeast Asia and the Pacific.

“We need to act quickly. The Golden Triangle is the geographic centre of the Greater Mekong Sub-region, and plans are well underway to expand transport and infrastructure and lower trade barriers and border controls across the region. The organised criminal networks that benefit from Southeast Asia’s illicit drug trade are well positioned to take advantage of regional integration,” Douglas said.

The resurgence in cultivation and production may be fuelled by a rise in demand for opiates in local and regional markets, says UNODC. In Myanmar and Lao PDR, the use of heroin, opium and synthetic drugs remains high – and was “much higher” in poppy-growing villages.

The increase raises concerns among development agencies and governments that not enough is being done to provide alternative employment options to poppy farmers and improve livelihoods in impoverished Myanmar.

Myanmar is the poorest in Southeast Asia according to the World Bank, and opium cultivation is a major source of income for many farming families, says the UNODC.

UNODC said surveys of farmers in Golden Triangle poppy-growing villages show that money from poppy cultivation is essential for villagers threatened with food insecurity and poverty.

“Villagers threatened with food insecurity and poverty need sustainable economic alternatives or they will continue, out of desperation, to grow opium as a cash crop,” Eligh said.

Plans are also underway to link infrastructure and transportation routes between countries, highlighting the urgent need to crackdown on opium cultivation, says the UNODC, since drug traffickers could be taking advantage of easier integration to access growing markets.

The UNODC is working to develop alternative livelihood options to help farmers switch to cultivating other crops, said Douglas. “But these programs have been of limited size to date and need to be significantly scaled up.”

Eligh told WSJ that in the absence of alternative employment and viable economic plans to help develop impoverished poppy growing areas, “then indications are that [opium production] may continue to rise.”