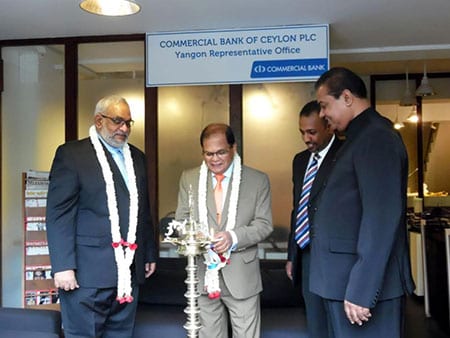 The bank will also arrange banking and advisory facilities, funds transfer and encashment services, it said in a statement.

Commercial Bank is the first Sri Lankan bank to be granted a licence by the Central Bank of Myanmar to operate a representative office in the country.

Sajeeve Piyaratne will be the Manager of the bank’s Yangon Representative Office, located on Pantra street in Dagon township.

The bank’s chairman Dharma Dheerasinghe said, “We believe that there is significant potential to increase bilateral trade between Myanmar and Sri Lanka, and that there is interest among Sri Lanka’s leading apparel exporters and other industries to set up operations in Myanmar.

“The presence of a representative office of Sri Lanka’s largest private bank would facilitate this process, and be mutually beneficial to the two countries.”

Commercial Bank Managing Director Jegan Durairatnam said: “We have noted that the banking sector in Myanmar is expanding rapidly. By opening a representative office, it would also be possible for Commercial Bank to build closer relationships with Myanmar banks and offer them its experience in very successfully moving from manual and mechanical systems to high-tech banking.”

Myanmar is Commercial Bank of Ceylon’s second overseas operation after Bangladesh, which the bank entered in July 2003, with the acquisition of the Bangladesh operations of Credit Agricole Indosuez (CAI).

Today, Commercial Bank’s operations in Bangladesh have grown to 18 outlets. In Sri Lanka, the bank operates a network of 242 branches and 610 ATMs.