HomeMMBIZ NewsStreet Vendors to be Housed in Highrises
MMBIZ News

Street Vendors to be Housed in Highrises 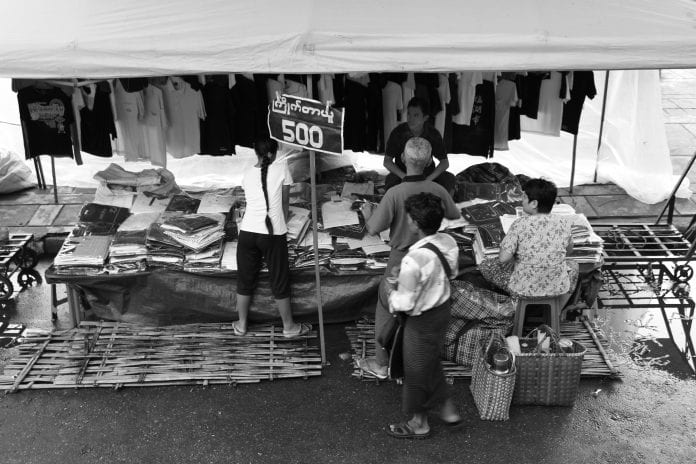 Markets in Yangon will be moved into high-storey buildings in order to house street vendors, the mayor of Yangon, U Hla Myint, announced at a special meeting of the regional parliament.

On September 23, authorities submitted a request to the regional government to enforce regulations over the street vendors for the safety and convenience of pedestrians.

Members of parliament (MPs) said that the livelihoods of street vendors would be damaged if they cannot legally conduct business.

They argued that while an alternative solution to support the livelihoods of the street vendors is elusive, the government should handle the issue with care while at the same time acknowledging that illegal street peddling is an open challenge to the rule of law.

They suggest that the government ban street vendors on the main roads but allow them to conduct business on side streets on specific days. Another idea is to change the time vendors are allowed to run stalls on main roads from the current time of 3-5pm to after 6pm, when the rush hour traffic has cooled down.

In his reply to the parliament, the mayor said that among the 173 markets in Yangon, those where street vendors are allotted space are to be transformed into high-storey markets to make more space for them to operate.

The government used to earn on an average K380 million ($380,000) per year from taxes imposed on street vendors in Yangon, but in 2011 the taxing of the vendors was halted, according to Yangon City Development Committee (YCDC).

“We are not taxing the street vendors so we can evict them any time without taking any responsibility,” the mayor said.

“The only good thing about having street vendors is that you can buy goods easily, but there are no other benefits. They litter the streets, sell unhygienic foods and block the streets. And don’t underestimate a street vendor just because of his trade, some of them own many apartments,” Ko Min Aye, a resident of Botahtaung township, told Myanmar Business Today.

Ko Tin Win, who peddles on Mahabandula road, said his family moved to Yangon from Ayeyarwaddy region in 2008 after cyclone Nargis snuffed out their livelihoods.

“Working as a street vendor is tough and sometimes my goods are confiscated by police or municipal staff,” Ko Tin Win, who has sent his three children to school, told Myanmar Business Today.

Although the government said the confiscated goods are thrown away, Ko Tin Win said in his five years working as a street vendor, he has never witnessed them throwing away seized goods.

The government’s plan to arrange spaces for street vendors has never been successful, said another vendor from Latha street.

Street vendors have noticeably increased in the past few years and it is estimated there are now over 5,000 vendors in six downtown townships, according to YCDC.

A recent survey shows that 33 townships, which make up YCDC’s territory, house over 70,000 street vendors.